Robo Fizz is the main antagonist of the second episode "Loo Loo Land" in the first season of Helluva Boss.

He is a robotic entertainer at the knock-off theme park Loo Loo Land and Blitzo's rival and former co-worker. He is established as being a robot knockoff of the as of yet unseen character, Fizzarolli. He also mentioned to have been shipped from a place a called Big Ozzie's Factory, so it's presumed that there are more Robo Fizzes.

He is voiced by Alex Brightman, who also plays the Broadway role of Beetlejuice.

Robo Fizz resembles a harlequin with red, white, yellow, and black coloring. His limbs appear to be more like tentacles than proper jointed limbs. He often speaks with a stutter and often sparks indicating that he is in a state of disrepair.

Before the start of the series, Robo Fizz was a robot version of a popular jester named Fizzarolli built at a factory called Big Ozzie's Factory. He was than shipped to Loo Loo Land, which was a rip-off of Lucifer's Lu Lu World, and became a circus performer and entertained children and worked with Blitzo, who was a clown at the time. Unlike Robo Fizz, none of the kids liked Blitzo and hated his jokes. Sometime later, Blitzo quit his job while Robo Fizz continued to perform.

Many years later, Stolas decided to take his daughter, Octavia, to Loo Loo Land and brought Blitzo, Moxxie, and Millie along to be their bodyguards. At the circus, Robo Fizz then sings a song about Loo Loo Land along with his band of animatronics, much to Octavia's annoyance. After the show, Robo Fizz ends up noticing Blitzo in the audience and decides to mock the imp over how unpopular he was when he worked at the park. Blitzo, then bites back by pointing out how Robo Fizz is nothing more than a robotic knockoff of the actual Fizzarolli. Regardless, Robo Fizz retorts by stating that unlike Blitzo, people love him. Blitzo responds by firing his Sniper Rifle at Robo Fizz, prompting the two to start fighting. Robo Fizz then wraps around Blitzo and throws him out of the circus tent causing him to crash into a stand selling torches, setting the tent and eventually the whole park on fire, destroying the other animatronics, and exposing Robo Fizz's robotic endoskeleton, all while continuing his fight with Blitzo.

At the end, Stolas finally decided that Octavia was too old for Loo Loo Land and Robo Fizz is eventually eaten whole by one of the park's dragons. It is unknown if he is still alive or not.

While no Robo Fizz makes a physical appearance in the episode, there is a billboard on top of Moxxie and Millie's apartment advertising them, indicating they are mass produced.

Robo Fizz is extremely disdainful and belligerent, as he mocked Blitzo and had no qualms getting in a fight that ended with Loo Loo Land being burned to the ground.

Robo Fizz is shown to be extremely flexible, since he can wrap around Blitzo and can move his limbs in an unnatural way reminiscent of a rubber-hose cartoon. He can also turn his head at a 90 degree angle, and was able to catch a bullet with his teeth. His most dangerous ability is cartwheel so fast that he can destroy anything in his path in a way not unlike Sonic the Hedgehog's Spin Dash. 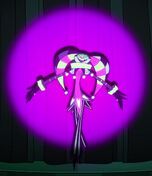 Robo Fizz coming to the stage

"Every boy, every girl, every woman, every man loves Loo Loo Land!"

"Does anybody love you? Blitzo?", Robo Fizz's evil grin

Robo Fizz getting shot by Blitzo during their fight

Robo Fizz's last moments before being swallowed by a dragon 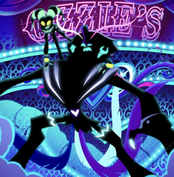 Retrieved from "https://villains.fandom.com/wiki/Robo_Fizz?oldid=4378693"
Community content is available under CC-BY-SA unless otherwise noted.