Roboforms, also named "Pilot Fish", are the recurring minor antagonists from the Doctor Who series. They are often used by superior villains.

When the Roboforms were first seen as minions of the Sycoraxs they were disguised as Santa walking down the streets of London trying to find the Tenth Doctor. They were playing their instruments until they used them to fire at Rose Tyler and Mickey Smith. One of them accidentally fired at a Christmas Tree which landed on them and killed them. After they failed to kill them in the streets the used a robotic Christman tree to kill them all at Rose's mother Jackie's house however the Doctor destroys it with his sonic screw driver.

Later, they were also used by the Emporess of the Racnoss to capture Donna Noble at the day of her marriage. Like before they were also disguised as Santa. They also used instruments and a specialized Christmas tree with decorations that come off and explode. After the Doctor brought her to safety she later sent a larger group of Roboforms after them and they ambushed the doctor and the bride by surrounding them (without the Santa costumes) wielding guns however they escape in the TARDIS.

They had one more minor appearance, when they allied the Daleks, the Cybermen, the Sontarans, the Judoon and others of the Doctor's enemies, to capture the Eleventh Doctor in the Pandorica.

Roboforms in their normal state wear black clocks that cover also all of their bodies except their hands and faces. Their robotic faces are yellow with large black eyes. 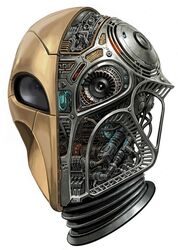 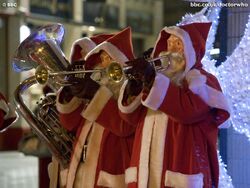 Retrieved from "https://villains.fandom.com/wiki/Roboforms?oldid=2968621"
Community content is available under CC-BY-SA unless otherwise noted.