Ruler of the Matrintis Empire

Gathering data on his foes.

Take over the world and rule humanity through fear.

Robogog of the 10-sai is the ruler of the Matrintis Empire and the secondary antagonist in Tensou Sentai Goseiger, serving as the main antagonist of the third quarter of the series.

Robogog believes all organic life, because of their emotions, have no purpose other than to to serve him and his machines by using fear. While mostly using his Matroids to do his dirty work, Robogog is not above personally getting involved in fights in order to gather data on an opponent.

He was voiced by Jūrōta Kosugi.

He was originally a human scientist who perfected a method to of immortality through cybernetics. Though ostracized for his methods prior to converting himself into a cyborg, the Matrintians begged for his help when their city sank into the sea. He obviously didn't help since he is the sole survivor.

Following the defeat of the Yuumajuu, Robogog was able to finish preparations for the Matrintis Empire's invasion, deploying Zan-KT of the Shield to gather humans for him to study. However, Zan-KT was destroyed by Goseigers

After Metal Alice recovered the body of Buredoran, Robogog rebuilt Buredoran as Buredo-RUN of the Cyborg. He instructed Metal Alice to wipe his memories to ensure permanent loyalty, leaving only his name and his hatred for the Goseigers. Rather than permanently delete the memories, however, Robogog decided to keep the memories on a flash drive for him to study.

After getting enough info on his enemies, Robogōg decided to make his move. Hijacking every TV across the world, Robogog announces that he will be launching an all-out attack.

After the Goseigers destroy his army of Bibi Soldiers and Zan-KT3s, Robogog deploys Buredo-RUN and uses him to seal the Tensouders and the Leon Cellular. Robogog then appears to fight the Goseigers. He attempts to finish them off with the Calamity Destruction, but Gosei Knight discovers that he can still use his Leon Cellular and blocks the attack before using his remaining energy to power up the Goseigers. Robogog then attempts to blow up the Goseigers by having Buredo-RUN suicide bomb them, but Metal Alice appears and volunteers to do it instead.

Metal Alice ultimately fails to blow up the Goseigers, and the Goseigers criticize Robogog for using his comrades as pawns. Robogog tells the Goseigers that what he does with his creations is his own choice. When the Goseigers call him callous, Robogog comments on how that sounds like something an "inferior human" would say before explaining why he believes humans to be weak and inferior and stating that they should be ruled through fear. The Goseigers accuse him of not knowing anything about humans, but Robogog replies by telling them the story of a scientist who ostracized by his fellow humans for his cybernetic experiments.

The Goseigers attempt to destroy Robogog with their Land Sky Sea dynamic, forcing Robogog to summon the Bibi nails to enlarge himself. The Goseigers then summon GoseiUltimate to duel Robogog, soon being backed up by Datas Hyper and Gosei Ground. GoseiRed makes one last attempt to appeal to Robogog's humanity, realizing that the scientist in his story was actually him. However, this only leads to him declaring that he's recovered his conviction and that humanity is not worth saving. He then activates his Suicide Crusher in an attempt to destroy himself, the Goseigers and a tenth of the Earth. Fortunately, the Goseigers form Ultimate Gosei Great and manage to defeat Robogog, reducing him to a pile of scrap.

However, he manages to survive thanks to his head staying intact. Robogog then taunts the Gosei Angels, saying that he can easily rebuild himself with his Salvation Cell. Robogog then summons Buredo-RUN and instructs him to activate the Salvation Cell. However, Buredo-RUN destroys the Salvation Cell's switch and reveals to Robogog that he regained his memories with Metal Alice's help. Buredo-RUN then explains to Robogog how he spared Gosei Knight's Leon Cellular to give the Goseigers the chance to defeat Robogog. Confirming Buredo-RUN's true nature, the Fallen Gosei Angel throws Robogog head into the air and destroys it with his missiles.

Robogog's spirit later appears to Brajira, making a futile attempt to attack him before being cast away. 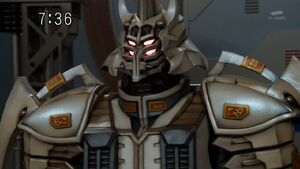 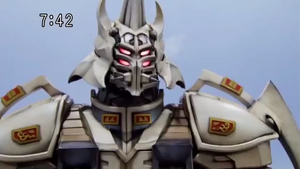 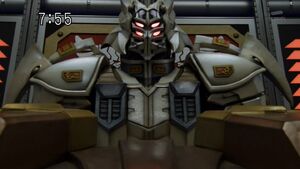 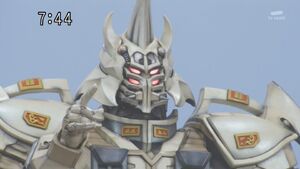 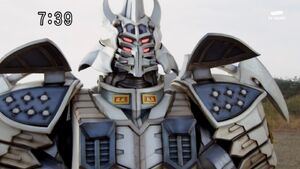 Robogog about to fire his missiles. 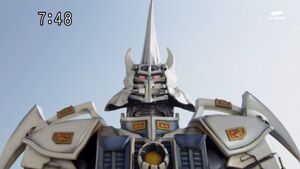 Robogog about to use his Calamity Destruction to finish off the Goseigers. 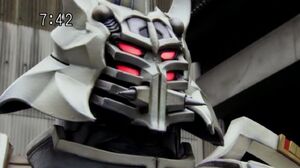 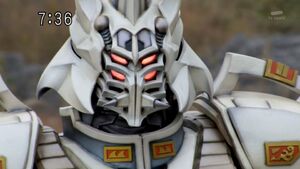 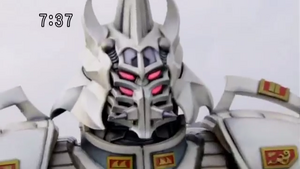