Take over the world and make it a better place (ongoing).

Rudolph "Rudy" Connors, better known as the Robot, is a major antagonist in the comic book series Invincible and a major character in its 2021 animated adaptation of the same name. He was a superhero and a member of the Guardians of the Globe but he became a villain during the course of the Invincible series. Robot is first thought to be nothing more than a robot with advanced artificial intelligence who leads the Teen Team. As it turns out, Robot is a machine controlled by the mind of genius Rudy Connors. Rudy was physically unable to live outside of a specially built pod due to outside air burning his skin, so he created Robot to live vicariously through. Rudy now exists outside his tube as a clone of Rex Sploud who, after his death, takes on his name in honor. He now wears a power-suit and is friends with Invincible.

Over the course of the series, he progressively becomes more deranged after many conflicts, leading to him becoming a villain and an extremist. This pushes him to the point of betraying Invincible and his teammates to become the ruler of Earth, killing every hero and villain that opposed his rule. Near the end of the series, he was successful in taking over Earth.

Rudolph Connors was born with a severe deformity, but was gifted with a genius level intelligence, which he used to study the fields of science, engineering, and genetics. Rudolph would decide to become a superhero under the alias "Robot", and became the leader of the Teen Team.

When Robot and the Teen Team where fighting the supervillains, the Mauler Twins, they were supported by the new superhero Invincible. Robot would later investigate mysterious bombings at a local mall, and managed to link his sources to a high school teacher named David Hiles. Connors then contacted Atom Eve on who the bomber was while he was battling an unnamed villain, and sent her and Invincible to apprehend him. Around this time, Connors was offered a membership to the Guardians of the Globe, which he accepted and told his teammates that he would disbanding the Teen Team. When the Guardians of the Globe were slaughtered by Omni-Man, Connors was appointed as the new leader of the team, and was tasked by Cecil Stedman to recruit superheroes for the group.

Robot organized tryouts for superheroes, and recruited Dupli-Kate, Monster Girl, Black Samson, Rex Splode, and Shrinking Ray into the new Guardians of the Globe. Connors also offered Invincible a membership into the Guardians of the Globe, but he refused due to him not feeling ready to commit to such a task. After Invincible brutally battled his father, Atom Eve asked Robot to find him since he disappeared, and spoke with Donald Ferguson. Donald revealed that they were keeping Invincible in care, and told Robot that he and the government weren't pleased with the Guardians. Later on, Robot and his team battled against an invasion by the Flaxans, and made their leader retreat when they started to remove their bands that allowed them to not age quickly.

Robot has super-intelligence, making him the smartest character in the Invincible series. He's an expert in robotics as seen through him making a robotic suit for himself in combat with flight, super strength, speed and durability. 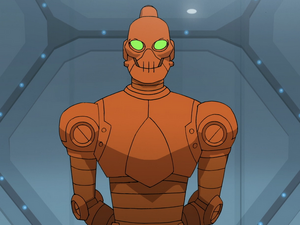 Robot in the Amazon animated series.