Take over the world and make it a better place. (Ongoing)

Robot (real name: Rudolph Connors) is a supporting character turned villain of Invincible. He was a superhero and a member of the Guardians of the Globe but he became a villain during the course of the Invincible series.

Robot is first thought to be nothing more than a robot with advanced artificial intelligence who leads the Teen Team. As it turns out Robot is really just a machine controlled by the mind of genius Rudy Connors. Rudy was physically unable to live outside of a specially built pod because the air would burn his skin, so he created Robot to live vicariously through. Rudy now exists outside his tube as a clone of Rex Sploude as his death and takes on his name in honoring him. He now wears a powersuit and became friend with Invincible. He was also in a relationship with Monster Girl one of his Teammates. Over the Course of the series he was becoming more and more deranged after many conflicts so much that he eventually became a villain and a extremists so much that he betrays Invincible and his teammates to become the ruler of earth killing every hero and villain that opposed him. Near the end of the series, he was successful in taking over the earth and not even Invincible was able to stop it from happening even Robot convincing Invincible that this was for the best. However when he wanted to use Thragg's children as soldiers, Invincible and the others felt that he fully crossed the Line With Invincible destroying his body and reducing him into a brain in a jar. Robot still lives and is now being watched over by Immortal man in case he ever tries anything.

Robot has Super-Intelligence making him the smartest character in the Invincible series and is an expect in Robotics as well as making a robotic suit for himself in Combat with flight, super strength, speed and durability. 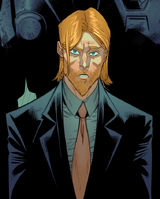 Rudolph Connors without armor
Add a photo to this gallery

Retrieved from "https://villains.fandom.com/wiki/Robot_(Invincible)?oldid=4276279"
Community content is available under CC-BY-SA unless otherwise noted.