The Robot is the secondary antagonist from the 2005 science fantasy action film, Zathura. The Robot is summoned by the card "Your Robot Is Defective". Its defect causes him to mistake Walter for a dangerous alien life-form that he is programmed to destroy.

He was portrayed by John Alexander and voiced by Frank Oz (who also played Yoda, Fungus, and several muppets from The Muppet Show and Sesame Street combined).

When Walter gets the "Your Robot Is Defective" card, this summons a tiny robot, who, after a few seconds, grows bigger, and targets Walter. When the house goes near Tsouris 3, the robot slides into the basement and damages itself. It immediately begins to repair itself. Later, when the Zorgons invade the house, and Danny has just narrowly recovered the game from them, the robot reactivates, and attacks Walter again. Fortunately, Walter uses the "Reprogram" card on the robot, which causes it to change targets and go after the Zorgons instead.

As Zathura starts, the parents of two brothers, Walter and Danny Budwing, are leaving, but Walter and Danny don't get along with each other. Danny wants to play catch, while Walter wants to watch T.V. Danny tosses Walter a baseball which hits him on the head. Walter then chases Danny through the house and catches him in the park across the street from their house, where they find a board game called Jumanji: A Jungle Adventure.

Danny brings the game home, where Danny then loses interest in playing it. Danny then finds another board game called Zathura: A Space Adventure. Danny starts playing Zathura, then he gets a card that says, "Meteor shower, take evasive action." Immediately, a meteor shower occurs. Danny and Walter soon realize the game sent them into outer space. Walter and Danny start playing the game Zathura, since the game won't take them home unless they finish it. Soon, Walter loses his gravity and Danny saves him from disappearing into space. When Walter takes his turn, a defective robot chases him through the house. When Danny takes his turn, he gets close to a planet called Tsouris 3 and gets shorter and wider. Soon, a Zorgon ship appears and Zorgons board their house. The robot chases the Zorgons away as Walter takes his turn and gets sucked into a black hole to go back in time. Walter goes back to the time where he catches Danny in the park. Danny finds Jumanji and looks at it, and is about to take it home, but Walter grabs the game and shoves it into the trash, implying that he has played the game before. Finally, the story ends with Walter's offering to play catch and the two brothers playing catch together.

This robot is actually meant to protect Danny and Walter from any alien threats like Zorgons (at least according to the game and its later act of redemption). However, due to the rule where it appeared in malfunction state, it took on a villainous role by attempting to murder Walter, believing him to be a hostile alien. That is until the boys showed the reprogram order card that made the robot reboot its programming system and finally redeemed itself after realizing its original purposes. 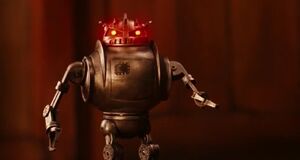 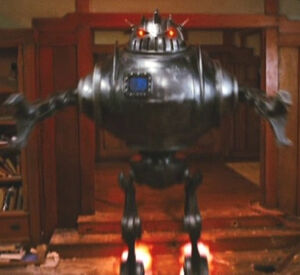