Exploit the fear of humanity to distract their society from other problems.

Corrupt Robots
The Robot Elders are a quintet of robot villains in the cartoon Futurama.

The Robot Elders were originally pieces of several meteorites that impacted the distant planet Chapek 9. The planet's founders carved the pieces into robotic beings and named them the Robot Elders. Eventually, the founders settled onto Chapek 9 and built a new society consisting of only robots. The Robot Elders became the secret rulers. They spread an irrational hatred of humanity throughout the society. As a result, the society developed a daily tradition of human hunts starting at 5 o' clock. Everyone - except for the Robot Elders - participated. There was a total of 145,999 unsuccessful hunts. The 150,000th hunt was successful when the society's mayor found the Planetary Express crew hiding in an abandoned adult store. The local court judge found them guilty of being human even though one of them was actually a cyclops. Bender, one of the Planetary Express' crewmen, was spared for being a robot and claiming to hate humans. The others were confronted by the Robot Elders who revealed themselves to be the rulers of Chapek 9. They were already aware that humanity wasn't a threat to them. They used the fear of humanity to distract their society from other problems such as its economy. The Robot Elders summoned Bender and instructed him to kill his fellow crewmen. He refused because they were also his friends. The Robot Elders decided to kill all of them. Fry threatened to breath fire on the Robot Elders if they came closer. This distracted the Robot Elders while the Planetary Express managed to escape Chapek 9. Sometime afterward, the Robot Elders joined the Democratic Order of Planets (DOOP) but they still maintained their positions on Chapek 9. 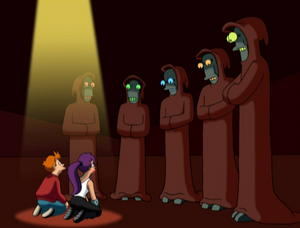 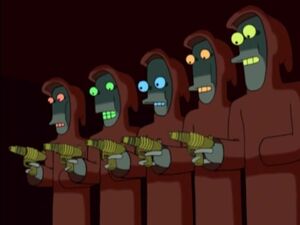 About to be executed.
Add a photo to this gallery

Retrieved from "https://villains.fandom.com/wiki/Robot_Elders?oldid=3668785"
Community content is available under CC-BY-SA unless otherwise noted.