Whatever Happened to... Robot Jones?

Genocide (According to the creator. Arguable. Unofficial)

On & Off Artificial Intelligence
Robot Electro Jones is the titular main protagonist of Whatever Happened to... Robot Jones? A KX8 robot designed by JNZ Robotics, Robot was built for the purpose of "interfacing" with humans, which often goes awry either due to Robot's inflexibility and misunderstandings regarding human customs; stupidity, ignorance or genuine malice on the part of human(s) he is interacting with; or a disastrous combination of both. He is usually the main hero, but he can be antagonistic at times. He is the main villain in the episode Safety Patrol.

Originally, as confirmed by his creator Greg Miller, it was apparently planned that Robot would rally (or possibly build) an army of robots and destroy all human life on Earth as the show's ending, but how this is true or not is still up for debate.

He was voiced by a text-to-voice program's "Junior" voice in Season 1, and Bobby Block in Season 2.

Robot is generally snarky, cynical, serious, short-tempered, intelligent and curious. At other times he is shown as pleasant and childlike. He gets easily excited when he hears video games being mentioned. He can rush into things without a second thought, often due to him believing that he is more efficient than everybody else around him or that he wants to gain love or popularity from it. Being a robot, he is alienated by many pupils at his school and struggles to know the difference between right and wrong. Sometimes he can be selfish, reckless and deceitful.

Although he is usually kind, gentle and polite, deep down he has a delusional, unstable, intense, dangerous, villainous and extremely ambitious side to his character.

While he usually acts agreeable during episodes of the show and does try to peacefully interact with the humans, Robot displays megalomania (meaning that he is obsessed with power and control). He also has a feeling of superiority over humans. He experiences delusional thoughts and violent fits of anger. Robot has a large appetite for power and recognition.

In the episode "Politics", Robot hears of a democratic campaign being run within the school for the position of student president, and he joins the campaign, aspiring to become "the supreme commander of all humans" and daydreaming of conquering the world.  He imagines what appears to him being worshipped by the humans as an enormous god. Throughout the episode he forces the students to vote for him. When his robotic supremacist propaganda fails to win over the students, he replaces his head with an animatronic Principal Madman head and takes over the school anyway, literally kicking Mr. McMcMc and his presidential rival, George, off of a stage.

In the episode "Safety Patrol", Robot's hunger for power is even more heavily emphasized. Robot joins the titular Safety Patrol as an officer and begins to enforce the rules so strictly that he has everyone, even his close friends, sent to detention. He is shown adopting glowing red eyes and laughing maniacally throughout this period, and is ironically overthrown by Principal Madman, who puts him in detention with everyone else.

In the episode "Family Vacation", he is shown with a violent temper that he has little control of. Robot loses his temper while playing an arcade game at Nob’s Arcade and ends up breaking the arcade machine. It's unclear if the machine was destroyed on purpose or not.

In the episode "Jealousy", Robot has a fantasy of himself murdering Finkman. Throughout the episode he becomes enraged constantly. He becomes very envious and hostile when he thinks of Finkman.

In the episode "Hair" his friends Mitch, Socks and Cubey laugh at how he looks. Robot does not seem to understand why they are laughing and takes it as an offense. He is seen displaying a bitter face as they continue to laugh. In response he gets his revenge for them taunting him by unfairly and unexpectedly removing the hair of everybody in the school.

At the end of the episode "Scantron Love", the human-like Scantron machine finally broke, likely due to "a broken heart" which resulted from Robot telling lies and cheating on the school History tests. It is possible that Robot was mainly responsible for the Scantron breaking down permanently.

While Robot's more sinister tendencies are not quite so strongly pronounced in other episodes, they are there, and all of this was likely done as build-up to the planned ending in which Robot ends human civilization; unfortunately, the show ended before this could be realized. 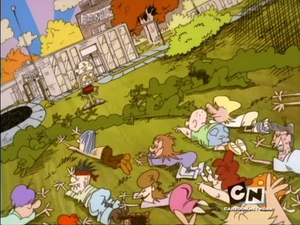 Robot's fantasy of being worshipped and ruling Earth. 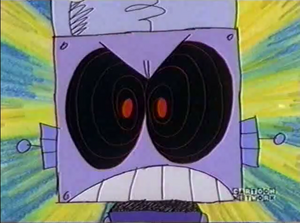 Robot is pissed off. 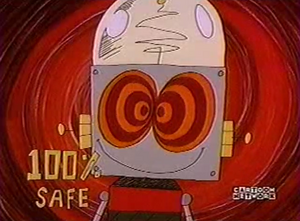 Robot goes totally mad with power after locking everyone in detention.

Robot thinking of using violence against Finkman in the episode "Jealousy".
Add a photo to this gallery

Retrieved from "https://villains.fandom.com/wiki/Robot_Jones?oldid=3529893"
Community content is available under CC-BY-SA unless otherwise noted.