To aid the Sheriff of Nottingham.

To reach The Promised Land.

Robotic Dark Knights
The Robot Knights are the secondary antagonists of the Doctor Who episode "Robot of Sherwood".

They came to Earth and allied with the Sheriff of Nottingham whilst disguised as knights. In exchange for helping him taking over England, the Sheriff gathered all the gold in the area to repair their ship's nuclear engines as they wished to reach the Promised Land.

They were present along with the Sheriff at an archery contest where they are ordered to capture The Twelfth Doctor. However, Robin Hood attacks one of the knights and cuts off it's arms, revealing it to be a robot. The robots then capture the Doctor, Robin and the Doctor's companion Clara Oswald.

The remaining robots flee in their ship, but due not to having enough gold to compiler repairs, the ship could destroy half of the country. The Doctor plans to provide just enough gold to the craft to give it the spurt of power needed to force it away from Earth. He along with Clara and Robin fire a golden arrow into the ship, which is then able to climb above Earth's atmosphere and detonate harmlessly. 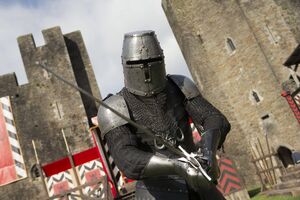 A robot disguised as a knight 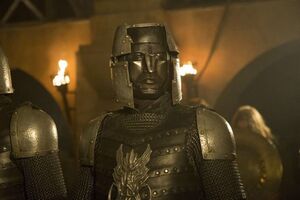 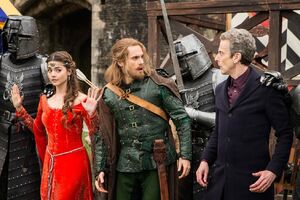 The robots capturing the Doctor, Robin Hood and Clara Oswald 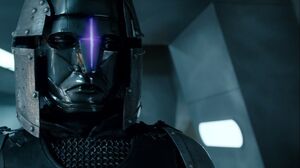 A robot firing a laser