Leader of the Marduk Party

Kill as many robots as possible.

Rock Holmes is the main antagonist of the 2001 anime movie Metropolis. He is the adopted son of the tyrannical Duke Red.

As head of security in Duke Red's private military force, Rock is tasked with suppressing any opposition from those who threaten his father's power, whether they be disgruntled human laborers or rebellious robots, the latter of which he harbors a personal hatred towards.

Upon discovering Tima, a robot created in the exact image of Duke Red's deceased biological daughter, Rock is driven into a hateful and jealous rage. Unwilling to accept the idea of a robot stealing his father's love, Rock embarks on a personal mission to kill her, unaware of Tima's greater purpose.

He was voiced by Koki Okada in Japanese and Michael Reisz in English.

Rock has brown hair, blue eyes, and aviator sunglasses. He is modeled after the "bad boy" aesthetic that was popular in the United States during the 1950s, somewhat inspired by the American actor James Dean and other western actors of the time period.

In Metropolis, Rock dresses in a red military style jacket with black suspenders, black cargo pants, a leather gun holster, and silver jackboots, fitting the dieselpunk atmosphere of Metropolis. This outfit is reminiscent of many twentieth century military uniforms, but is clearly a direction allusion to the Nazi Geheime Staatspolizei, better known as the Gestapo.

On the surface, Rock seems to be very calm and collected, exuding an air of absolute confidence. Unwavering in his purpose, he carries out his father's orders with absolute loyalty. In reality however, this is merely a façade, as Rock is very impulsive and emotional. Suffering from intense jealousy to the point of obsession, he desperately seeks Duke Red's approval. Rock believes that only he is deserving of his love and respect, with Tima being totally unworthy of it.

Rock is cold and merciless while carrying out his missions, gunning down anyone who stands in his way, even innocent unarmed bystanders. He is reckless and quickly resorts to violence, as evidenced by when he ruined a public event by shooting down a rouge robot, as well as flying into a murderous, destructive rampage when discovering Tima.

Despite treating Rock poorly, Duke Red seems to be the only person Rock truly cares about. He still wishes to serve his father and win back his approval even after he abandons Rock in favor of Tima.

Rock Holmes is the adopted son of Duke Red, the unofficial ruler of the most advanced city on the planet, simply known as Metropolis. Rock was orphaned during a very long war which ravaged most of the city. He was adopted by Duke Red after the death of Red's daughter Tima. Red wanted to end his depression and fill a void in his life, however he quickly emotionally abandoned Rock once he realized he will never replace Tima, leaving Rock again without a central father figure.

As he grew up, Rock rose through the ranks of Duke Red's Marduk Party, a private military force and security service tasked with protecting the city. By his teenage years, Rock had become the head of security and top Marduk leader. While the Marduks were publicly created to "Protect the city" they were actually created to secretly increase Duke Red's influence and power, to the point of invalidating the actual government body. Under the command of Rock, the Marduks began violently subjugating robots, whom Rock harbored a personal hatred towards.

Duke Red announces the opening ceremony of the "Ziggurat", a giant skyscraper and secret weapon of mass destruction, which he publicly claims will increase mankind's power. He also commissions the creation of an android named and modeled after Tima, who will be some sort of key to the secret weapon. The celebration for the Ziggurat is cut short by a robot vigilante, who Rock promptly shoots to death for being outside it's zone. Upon meeting with him afterward, Rock explains the situation to his father. Red chastises Rock for his public display of violence, and orders him to leave at once.

Disconcerted, Rock decides to spy on his father, quickly becoming suspicious of Dr. Laughton, a scientist with close connections to Duke Red. Rock discovers Laughton's laboratory, as well as Tima. Rock confronts Laughton on Tima's existence, who tells Rock that Duke Red is waiting for her completion, so she may sit upon the throne of the Ziggurat.

Rock is overwhelmed with jealousy at the thought of being replaced, especially by a robot. He justifies this hatred of Tima by deeming her a threat to the safety of his father and Metropolis. Vowing to protect his father, Rock murders Dr. Laughton and burns his lab to the ground, in hopes to destroy Tima. As Rock flees, private detective Shunsaku Ban and his nephew Kenichi (who came to Metropolis to arrest Laughton) come across the burning laboratory. Kenichi tries to protect the now activated Tima, and they fall into the sewers below.

Rock reports the death of Laughton and the destruction of his lab to Duke Red. Rock feigns ignorance of the situation and lies about the details of the event. Later, after observing the destruction site, Rock comes to the realization that Tima has survived. Rock travels to the lower levels to find and kill her, while Shunsaku Ban secretly follows behind him, correctly assuming him to be Laughton's killer. Rock discovers Kenichi and Tima hiding in an industrial zone, and he immediately begins to shoot at them. They escape however, prompting Rock to recruit the help of his fellow Marduks to track them down.

Meanwhile, a group of laborers revolt against Duke Red, who uses this event as an opportunity to assassinate the mayor and president. Now the official ruler of Metropolis, Duke Red orders martial law. Kenichi and Tima finally meet up with Shunsaku back on the surface, Rock appears and orders Kenichi to hand Tima over to him. As a means of intimidation, Rock shoots Shunsaku in the arm, causing Kenichi to attack Rock, making him drop his gun. As Rock beats Kenichi down, Tima picks up his gun and aims it at him.

Rock gets up and mocks Tima, saying that she cannot harm a human like him, even going so far as to encourage her to shoot him. Duke Red suddenly arrives and confronts Rock on how he knows of Tima's existence. Rock tries to explain that a robot should not be allowed to rule the city, and that she cannot be trusted. Realizing that Rock was behind the attack on the lab, Red disowns Rock, stripping him of his command of the Marduks, and orders him to leave his sight forever. Red then takes Tima to the Ziggurat.

Rock, now politically powerless, tricks Tima into meeting him under the false premise that she would be meeting Kenichi. He then violently assaults her, kidnapping and deactivating her. He takes her to an empty bar, where he plans to slice her open, but he is attacked from behind and knocked out by a vengeful Shunsaku. Shunsaku rescues Tima, and they discover Kenichi is being held captive in the Ziggurat, but are then captured by Duke Red and taken to the top of the Ziggurat. Rock wakes up and arms himself with a handgun, secretly following everyone.

As Red gives a speech to Tima on the top of the Ziggurat, Rock secretly enters the room in a disguise. Rock then reveals himself and attempts to reason with his father one last time, who refuses to listen to him. Fed up and suicidal, Rock pulls out his gun and shoots Tima in the chest, Rock himself is then shot in the chest by guards and is incapacitated. Rock's actions cause Tima to go berserk, where she sits upon the throne of the Ziggurat and activates the superweapons, beginning a genocide on humanity. Robots under her control start attacking everyone. Rock regains consciousness as his father is cornered by Robots. Rock proclaims that robots will never take the life of his father, and commits suicide by overloading the Ziggurat, causing the entire tower to explode and fall apart, killing himself, his father, and Tima in the process.

As Rock stopped Tima's rampage, he essentially saved mankind from destruction, earning him some level of redemption despite his overall heinous actions. 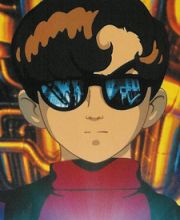 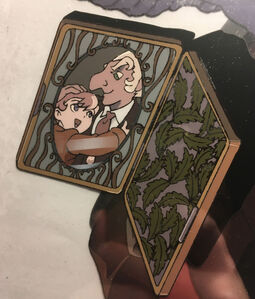 Rock as a child. 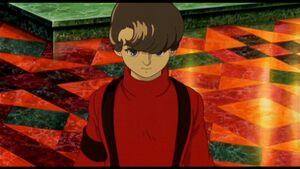 Rock speaking to his father. 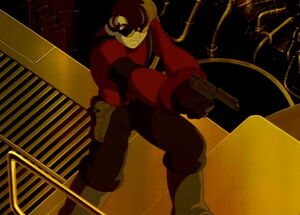 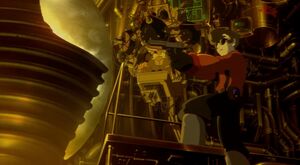 Rock shooting up Dr. Laughton's lab after he murdered him. 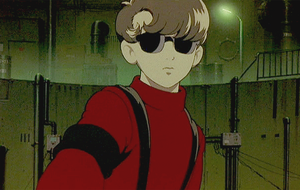 Rock escaping from the lab. 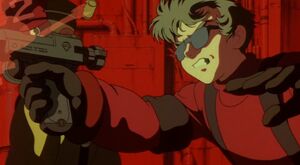 Rock shooting at Tima and Kenichi. 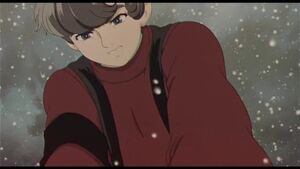 Rock strangling Kenichi after he attacked him.

Rock taunting Tima on being a robot. 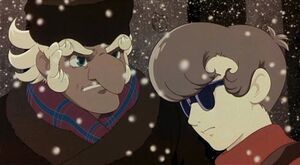 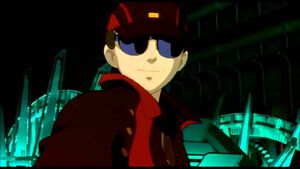 Rock after he loses command of the Marduks with an evil grin on his face. 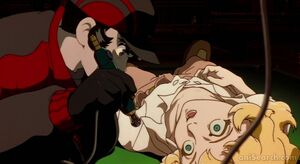 Rock preparing for his final attack. 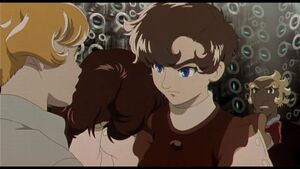 Rock revealing himself on the Ziggurat. 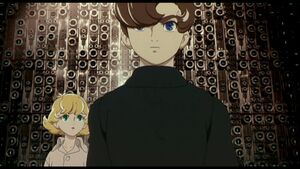 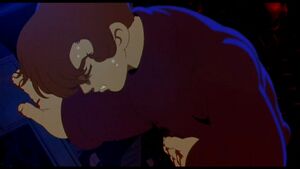 A wounded Rock, shortly before his suicide.