Rocky is a minor antagonist in Superman II

He was portrayed by Pepper Martin.

Rocky is a truck driver and a regular at a roadside diner that Clark Kent and Lois Lane had pulled over to eat at in following the loss of Clark's powers as Superman. The waitress hears the honking of the truck's horn and knows who it is and not pleased that Rocky is coming in. Rocky comes in and sits next to Lois Lane at the counter and tried to make advances at her while Clark was in the bathroom. Clark tells Rocky that he is sitting in his seat, but Rocky refused to budge telling him "You're seats in their, four eyes". Clark tells him that someone should teach him some manners. Rocky responds "yeah, let me know when he comes in". Then Clark asked Rocky if he would "step outside" so they can deal with this man-to-man, and he accepted. Ron, the diner owner tells Rocky "Now Listen Rocky, your steak's coming right up". Rocky tells Ron "Keep it on the flame, it's just a minute steak". Rocky tells Clark "After you", allowing Clark to go out first, but only for Rocky to push him through the door from behind. Clark experienced the shedding of his own blood, but refused to let Rocky get the upper hand. As he approached Rocky sitting in the seat again, Rocky belted him one in the stomach. Lois Lane attacked Rocky from behind, and Ron pulled Lois off him and protected her from Rocky. Rocky decided that it wasn't worth eating at the restaurant and soon left.

Later on after Clark Kent got his powers back as Superman, Rocky was eating at the diner, rudely complaining about the low-quality of the food, says to Ron the diner owner "Hey Ron, give me another plate of this garbage". Annie, the waitress responds "Garbage, that's my number one special, Rocky". Rocky tells her rudely to get him some more coffee, too. Clark comes in and hears what he says. Clark says to Rocky "Gee that's funny, I never seen garbage eat garbage before". Clark tells him that he is sitting in my seat. Rocky says to him "Come and get it, four eyes". Ron tells Rocky to take it easy, he just got this joint fixed it cost him a fortune. Rocky shoves Ron away. Rocky stood up to slug Clark in the stomach, he hurt his hand, not knowing that Clark had his powers as Superman restored. Clark gave Rocky a high-speed spin on the stool, sets him on his food and then sent him flying across the counter into a pinball machine, knocked out cold. Clark paid the diner owner for the damages.

This order's to go. 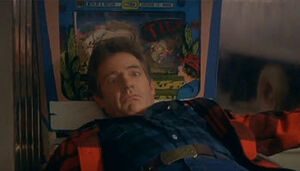 Rocky gets his just desserts.