Rocky and Mugsy are a pair of old-school gangsters from Looney Tunes who have come into conflict with Bugs Bunny and other Looney Tune characters in various cartoons. Although not as common as legendary villains, such as Yosemite Sam or Elmer Fudd, these two did appear more than once and are fairly recognizable characters both in appearance and behavior. Rocky is the leader, and Mugsy is the comic relief.

Rocky is a very short man with a very large hat and is also the ringleader of the duo, being smarter than Mugsy, but also having a short fuse- thus, he is prone to violence when he gets angered. His face is seldom seen, as his hat pretty much covers most of his head and, despite his small size, he is a formidable fighter if he has to be and is proficient with firearms (at least for a cartoon character).

Mugsy is large but stupid and, although loyal to Rocky, is often the target of the former's violent temper- despite his size, Mugsy doesn't seem to be as proficient a fighter as Rocky, though it could be that his loyalty to Rocky prevents him from actually fighting back.

The two live the lifestyles of stereotypical criminals and are wanted men supposedly notorious in their setting- though like most (if not all) Looney Tunes villains, they are hapless against the antics of the hero (often Bugs Bunny or some other "main" toon). 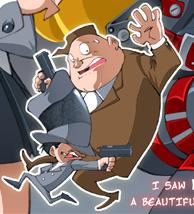 Rocky and Mugsy in Grim Tales. 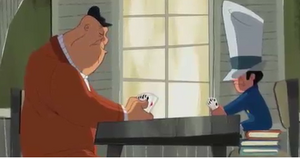 Rocky and Mugsy in The Looney Tunes Show.