Create a exceptional athlete for the German superteam.

Destroy the Midwest with the Sun Gun.
Kill Joseph Stallion (all failed).

Roderick Metze was born to family with ancestors who sided with the Confederate States during the Civil War, and according him, were humiliated during the war. He is the son of a preacher, who was a grand dragon of the Ku Klux Klan, whom he states was secretly a member. When he was young, Metze asked his father how he knew whites were better than African-Americans, with his father replying that he was (and possibly all white people) ordained to commune with God.

Before the Nazis won World War II, Metze was a dentist with a unpleasant reputation, and later became a Nazi collaborator during the occupation. After cooperating with the Nazis, Metze became a member of the Nazi Party, receiving the rank of Übercommander. When a African-American named Stallion formed a resistance group, Metze ordered his arrest and sent him to the Hillsboro mines to work till he "croaked". Metze worked on fidning the secret genetic material of exceptional American athletes to create a super sportsman for the Nazis, but his project was considered a waste of time and resources.

Metze was also part of the German superteam, and in 1950, won a game by scoring his fourth touchdown. However, Joseph "Gunslinger Joe" scored one point for his team, and was eventually captured with resistance members. In addition, its' believed that Metze worked with Michael Rademaker in creating a bomb that would flush out the resistance in Springfield.

When Gunslinger Joe broke the rules by scoring on his team, Metze ordered the Nazis to arrest him. However, Metze recognized Joe as the son of his resistance leader whom he arrested years ago, and instead had him sent to Station Omega. Metze underestimated Joe's strength, who broke out of the station and seeks revenge on the Übercommander. However, Metze captured Joe once again when he traveled to the resistance hideout. Metze decided to allow his men to kill Joe, seeing that Stallion wasn't worth killing because he was African-American.

Joe managed to escape by tackling a soldier out of the window, and goes on a rampage to the Secret Police Headquarters. Metze his heard through the speakers, and reveals that he is surprised that slave like Joe has caused him problems. He also gives Joe his father back as a gift, but also left a bomb at the headquarter so he wouldn't be humiliated again. Metze believed that Joe and his father died due to the police headquarters being burned down, but Joe removed the bomb and managed to get his father to safety.

Later on, Joe went on his quest to hunt down Metze, and it's implied that Joe's father died during his journey. Metze went onto Venus to hide from Joe, and intended to fire the Sun Gun at the Midwest. Gunslinger Joe manages to stowaway onto a rocket headed to Venus, and goes on another rampage to reach Metze. When heading to the control room, Metze surprise attacks Joe by shooting him in the chest, wounding him. Metze gloats to Joe that he is nothing but a slave, and brags to him that killing him will be poetic justice.

Metze asks Joe does he have any last words, and he asks him why he hasn't fired the sun gun yet. Metze states that it isn't fully operational yet, and asks Joe if those were his last words. Joe replies no, and manages to surprise attack Metze, tackling him out of a window, causing the Übercommander to fall to his death. Joe managed to escape Venus while fighting off the Nazis, and also caused the experiments on creating a superior Aryan athlete cease. 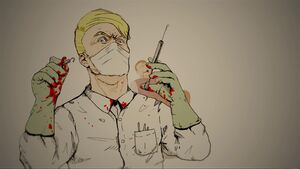 Metze as a dentist, before becoming a Nazi collaborator.

Metze capturing Mr. Stallion, in front of his son, Joe.

Metze falling to his demise.