Rodney "Rod" Farva is a member of the Vermont State Highway Patrol and an antagonist in the 2001 police comedy film Super Troopers. When he and his team get the chance to save their station from closing by busting a drug-smuggling ring, he betrays them by informing the local police of their discovery and uses this to become a Spurbury Police officer. However, after a confrontation with his former teammates he feels remorseful and admits that he only did it because he felt underappreciated.

He was portrayed by Kevin Heffernan.

Farva seems to seek the approval of his co-workers, to the point that he'll try to out-do their pranks. But, where as their pranks are just goofy and fun, Farva's are mean-spirited and perverted. He also is shown to have an anger issue, which results in him being demoted to radio dispatcher, to eventually janitor. Despite his faults, he is very loyal to his station. The first time Grady bribes him to betray his team, he refuses, stating that "he's all highway." It's only after being chewed out and made a janitor by O'Hagan, that he takes Grady's offer.

Farva joined the Vermont State Highway Patrol at some point in his life, working as an officer. During a traffic stop, when he stopped a school bus, some kids started throwing things and pouring milk on him. He lost his temper and entered the bus trying to arrest the kids. After this altercation, he was demoted to radio dispatcher.

Farva is the black sheep of the highway cops. He goes out of his way to play cruel jokes on the rookie, Rabbit, while others only haze him in good fun. After his suspension ends, it resumes almost immediately after Farva assaults a fast food employee for playing a prank on him.

Farva eventually ends up betraying the highway cops by joining their rivals, the Spurbury Police, and by ruining their chances of recognition for a drug bust. After a confrontation, Farva breaks down and admits that he betrayed his friends because he felt unappreciated. A redeemed Farva then helps the highway cops bust the corrupt locals by exposing their role in a drug smuggling ring. 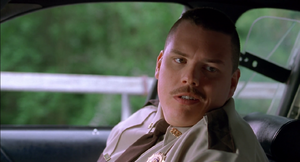 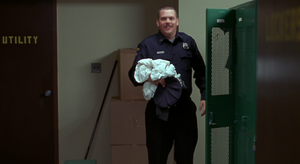 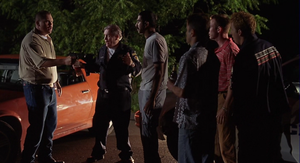 "You're all under arrest for stealing a Spurbury Police vehicle." 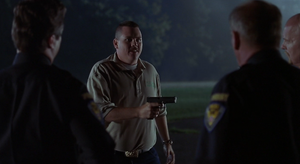 Farva shows up to arrest the smuggling ring.