Villains Wiki
Register
Don't have an account?
Sign In
Advertisement
in: The Cleveland Show Villains, Kids, Cartoon Villains,
and 10 more

Bully (redeemed)
Rodney King is a one-time villain from the FOX animated sitcom The Cleveland Show, only appearing in the episode "Yemen Party". He is a playground bully at Harper Elementary School, of whom Rallo had a bone to pick with.

He was voiced by Carlos McCullers.

Rallo discovers how to manipulate Junior's movements, when being held within his baby carrier. He decided to use this for good, by using his powers to take down the school bully. Rodney King was spinning Walt around on the merry-go-round, making him nauseous, even when he was asked to stop. He then got Junior to pick him up and hang him by his shirt on a flagpole. The other kids cheered after Rallo and Junior saved the playground.

The kids celebrated their freedom on the playground, and erected a statue in honor of Rallo, but it wasn't long before Rodney returned. Rodney came in, using his baby carrier to manipulate his socially awkward, pre-diabetic older brother, Franklin. They came back for revenge. Junior was asleep at this time, yet still surprisingly not at school for some reason.

It didn't matter though, because Rallo woke him up and the two duos got into a huge Transformers-like battle. During the fight, Junior and Franklin took most of the beatings, while Rallo and Rodney remained generally unscratched. At the end of the fight, Junior and Franklin hurler toward each other, causing a massive nuclear explosion to wipe out the entire playground.

After the smoke cleared, Rallo and Rodney realized their fighting was ridiculous and they shouldn't be arguing anymore. They became friends and when Rodney King introduced himself, he mentioned having no relation to the celebrity of the name name. The two of them walked off and had a conversation about the hot Ralphed store worker, Big Boob June. 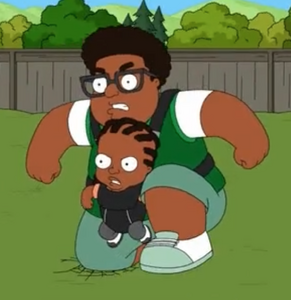 Rodney and his brother Franklin.