Diary of a Wimpy Kid franchise

Get Löded Diper signed up with a record label.

On & Off Juvenile Delinquent

He is a high school student and the older brother of Greg and Manny Heffley, who he constantly harasses over and over throughout the series. He is also the founder and drummer of the band Löded Diper

He was portrayed by Devon Bostick in the first three films, and Charlie Wright in the fourth film.

Rodrick is the oldest of the Heffley brothers. He is usually seen frowning, although he has smiled on other occasions. In the books, he has a perfectly round head and his hair is spiky. In the films, he has shaggy brown hair and is fairly tall, he wears eyeliner on special occasions or when performing

Rodrick is Greg and Manny's older brother, the main antagonist/deuteragonist of the second book and movie ("Rodrick Rules") and a bully throughout the series. He's a junior in high school. There isn't much of a relationship between him and Manny, but he and Greg seem to have huge sibling rivalry going on however they sometimes seem to get along.

From Greg's point of view, Rodrick is always picking on Greg. However, as Rodrick can frequently be a jerk to Greg while also manipulating their parents and other grownups, sometimes, but rarely, are his actions justified. Rodrick has a band called Löded Diper, which is a metal band whose lead singer is a man named Bill Walter, who is a 35-year-old high school drop out, is unemployed, and still lives with his parents. In Rodrick Rules, Rodrick enters his band into a talent show, but a kindergartner named Harry Gilbertson gets the reward of "Best Musical Act" even though his act was simply skating around a radio playing "Yankee Doodle Dandy".

His humor consists of seeing people get hurt. He seems to be very fond of horror movies, absolutely loves music (especially heavy metal), and also has a best friend named Ward. Rodrick did terribly back in elementary and middle school. The only reason why Rodrick is doing slightly better at high school is that he cheats by having his dad do all the work for him. Rodrick is extremely lazy when it comes to school, and that explains where Greg gets his laziness. Rodrick would much rather sleep then pay attention to real life and everybody knows he loves to sleep.

After the day Greg explains the Cheese Touch, Greg said Rodrick pulled a prank on him in the summer, by making Greg fooled and thinking he needed to go to school, but Greg was making a racket and his dad came in at 4 AM, yelling at Greg. Rodrick slept quick to look like no evidence, and it worked. On page 15, he appears as Greg saying set your hopes low to people so people think you did it. 15 pages later, Greg is saying that Rodrick has a band named Loded Diper and he likes to play heavy metal music, which Susan does not mind. He also appears later being punished for letting Manny bring a magazine for adults to show and tell. In the play, Rodrick videotapes so he can make fun of Greg Heffley as a tree as him singing. Rodrick was mad when Greg did not sing, so as Patty Farrell.

In this book, he makes a big appearance on almost every page. Greg explains that Rodrick dislikes Greg having a diary and if Greg tells on Rodrick for something bad, Rodrick will explain Greg's secret.

Diary of a Wimpy Kid: The Last Straw

Greg came up with this thing in which is called "Three Strikes and You're Out" for Rodrick so he can be a better person. However, Rodrick punched him three times before he can decide his punishment for bullying Greg three times. Later on, the parents give Rodrick money so he can buy books for his SAT classes, however, Rodrick didn't listen and instead bought a tattoo of the band's name, Loded Diper. In a flashback, since Greg and Rodrick were telling Susan wrongdoings, she decided to come up with a plan called the "Tattle Turtle". It turns out that Rodrick ended up getting scot-free for his actions because the Tattle Turtle is a toy instead of being a real-life turtle, like stealing Greg's money from his piggy bank. After the horrible church day of Greg calling Manny a "Ploopy", Rodrick decided to split the word "Ploopy" into three days so he can call Greg that.

In the first movie, he is a major antagonist. He is told by his parents to give Greg advice on Middle School and when he does so, he tells Greg he will not last long in middle school.

Later Greg and Rowley go into Rodrick's room and find a magazine. They assume he won't know they're there because he has band practice. Rodrick shows up and threatens to literally kill Greg and chases him into his room. Greg stays in until he has to go to the bathroom. When Rodrick appears to leave, Greg makes it to the bathroom but Rodrick jumps out and surprises him. Greg ends up peeing on Rodrick and gets in trouble for it.

On Halloween night, Rodrick is seen telling Greg and Rowley the local urban legend of "The Devil Worshiper Woods", in an effort to intimidate them.

During the Wizard of Oz play, Rodrick is seen trying to tape Greg singing, making Greg nervous. When Patty Farrell yells at Greg for not singing, an apple throwing fight breaks out, which Rodrick proceeds to tape.

Greg later gets even with Rodrick by putting a chocolate bar in the lewd magazine in Rodrick's bag so their younger brother Manny would find it. Mrs. Heffley sees Manny reading said magazine which has a picture of a girl with a bikini on the cover. She gets angry at Rodrick for it and grounds him.

In the theatrical motion picture version of Rodrick Rules, he starts out as a villain as in the first movie and spends the majority of the movie in that capacity, but later is the anti-heroic deuteragonist and full-fledged hero as he changes into a more mature character as the movie progresses. He taught Greg Heffley on how to resist ever telling their parents about the party Rodrick threw when their parents were on vacation similar to the book. Unlike the book, Rodrick was forced to let Greg out of the basement after locking him because their mom called and wanted to talk to Greg. After that, Greg was allowed to stay in the party. In the morning, Rodrick and Greg rush to fix and clean everything, but the only existing problem is someone spray-painted on the bathroom door saying, "RODRICK RULES", which they replace with the basement door, but the difference is the basement door doesn't have a lock. In the movie, it shows that he spells door as d-o-r-e.

While still hiding the fact of the party's existence from his parents, Bill Walter arrives to discuss joining Rodrick's rock band called Löded Diper. Their dad, Frank, managed to find proof of the party by finding several pictures of Rodrick there (unlike in the book when there was only one picture), and he angrily grounds both Rodrick and Greg, with the harshest punishment being Rodrick not allowed to perform in the school band.

They are forced to stay with their grandpa, and after Greg writes in his diary of encountering Holly after she gives positive feelings for him on how to deal with an annoying sibling, Rodrick reads it out loud when Greg was sleeping in the morning. Greg wakes up but is only wearing his underwear. Rodrick decides to show the diary to Holly for fun, but Greg managed to grab it back from him. Greg however ends up being cornered into hiding in the women's bathroom and escaped back into the room. However, Rodrick was recording all of this on tape with the security cameras since their grandpa watches the surveillance channel of the retirement home he lives in.

Greg then finds his best friend Rowley unable to perform his magical act because his assistant got stage fright. It is later revealed that Bill Walter kicked Rodrick out of his own band after joining in. Greg makes a deal with his mom that if he does the magic act with Rowley, then Rodrick will be allowed to play in the band. Rodrick manages to do so and decides to give him back the tape with Greg running around the retirement center in his underwear.

In this movie, he is the supporting protagonist and is still on good terms with Greg. He falls for Holly's older sister Heather and goes great lengths to impress her. He is also trying to advertise his band, via selling adds of it to kids at Greg's school and wearing tattoos. When he first meets Heather, it appears that she is worse then he is. Heather speeds off and runs over his foot.

When Rodrick finds out Greg has been going to a country club behind their parents' back, Rodrick threatens to tell Mr. and Mrs. Heffley unless Greg gets him in the country club. Rodrick manages to get into the country club via hiding in the back alley and going through an entrance to the pool. Rodrick hangs out near the pool to hang out with Heather, who is working as a lifeguard.

Rodrick tries to pretend to drown in the pool, hoping to get CPR from Heather, but she ignores him. Rodrick is "saved" by a man hanging out, who does do CPR on him, much to his Rodrick's disgust.

When Heather tries to get a band to play at her sweet sixteen, Greg decides to help Rodrick out and tells Heather about Löded Diper, passing them off as a world-famous brand.

At Heather's sweet sixteen, Rodrick tries to impress her by singing Justin Beiber's "Baby", but she isn't very impressed. She even appears annoyed at him and even says she's going to kill him. After a series of clumsy mistakes, Heather's sweet sixteen is ruined. Nonetheless, Rodrick still tries to ask her out, but whether she accepts his offer or not is unknown, yet unlikely.

Diary of a Wimpy Kid: The Long Haul

In the fourth movie, Rodrick goes along with the rest of his family on their road trip. At their hotel, Rodrick discovers Greg's plans to go to Player Expo. Greg convinces Rodrick to keep it secret, telling him that there's a rock band video game tournament. Later, Greg and Rodrick sneak out of the hotel to go to Player Expo. Greg tells Rodrick to take a video of him meeting Mac Digby, but their plans are foiled when their mother steps in to escort them. 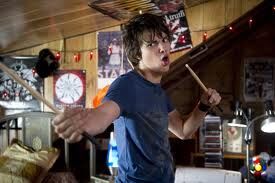 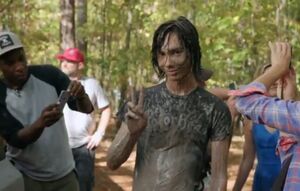 Retrieved from "https://villains.fandom.com/wiki/Rodrick_Heffley?oldid=4272097"
Community content is available under CC-BY-SA unless otherwise noted.