Mastermind of the R incidents.
(both in the video game)
CEO of Clifford Enterprises (in the film)

Acting friendly towards others.

Having Pokémon exposed to R.

Use R to take control of Ryme City and seize power over the world (failed).

Eliminate anyone who stands in his way (failed).

Roger Clifford, better known as simply Roger, or "The Mastermind", is the main antagonist of the 2018 video game Detective Pikachu; a spin-off of the Pokémon franchise and a major character in its 2019 film adaptation Pokemon: Detective Pikachu. He is the seemingly friendly producer of the TV network GNN, who is later revealed to be the one behind all the Pokémon-related incidents affecting Ryme City.

In the video game, he was voiced by Xander Mobus in the English dub, who also voiced Master Hand, The Conductor, Abigail, and Momoshiki Ōtsutsuki, and by Hiroki Tōchi. In the Pokémon: Detectve Pikachu film, he was portrayed by Chris Greere.

Roger was the producer of the GNN TV station, and was highly successful at his job due to his charisma, friendly nature and good ideas. At some point prior to the game, he discovered Pokémon Comprehensive Laboratory's failed miracle drug called R, which, due to being derived from Mewtwo's cells, would cause any Pokémon that consumed it to become incredibly powerful, as well as incredibly hostile and violent.

Deciding to use R to gain power, he had Simon Yen, the only person other than Dr. Waals who knew how to make R, kidnapped and forced to produce the chemical inside a laboratory at Ryme Wharf, while he built GNN up as the most influential TV station in the city, so he could control any and all information that went through it. Then, he had R dispersed on various instances in order to make Pokémon go berserk (primarily in front of GNN cameras or reporters, so the company could profit off of the chaos). He did this through his main henchman Keith Norman (who was unaware of his boss' true identity), whom he also sent to attack Harry Goodman with his Skorupi when he and his Pikachu began to investigate the incidents. Eventually, through someone working for Carlos Hernando, Roger had Harry's car tampered with, resulting in an accident that caused Harry to disappear and Pikachu to lose the ability to use attacks, while gaining the ability to speak. Two months later, Harry's son Tim comes to Ryme City to search for his father, and teams up with Pikachu to do so.

Roger is first seen in Chapter 5, "Fine Park", where he, Emilia and Meiko stop at the Hi-Hat Café to get coffee. When they arrive, they meet Tim and Pikachu, and Roger introduces himself, remarking that Emilia and Meiko cannot stop talking about him and his detective skills. When Tim states that he and Pikachu are headed to Fine Park to investigate the incident that happened there a year before, Roger invites him to come to GNN to watch the coverage Emilia and Meiko had done on it the next day.

Later, in Chapter 6, "GNN", Tim and Pikachu arrive at the GNN building to see the Fine Park footage, and Meiko and Emilia decide to take them to the studio first to say hi to Roger. Inside the studio, Roger is being praised for his idea of Yanma cameras by the GNN president, Mr. Graham. When Tim and Pikachu arrive with Meiko and Emilia, Roger introduces his boss to the two detectives. Meiko soon leaves to get the Fine Park recording, and Roger offers Tim and Pikachu a tour of the studio. Roger and the other GNN staff members are later summoned by Tim and Pikachu when they discover who had stolen Carina Mitchel's violin, exposing the culprit as Max Warhol. Max soon breaks down and explains that he stole the violin because he thought his popularity was sagging and he would lose his job, needing to sell the violin to pay off his debts, however, Roger explains that he was planning on getting Max to continue as the host of Maximum Music, but now has no choice but to call the police. Roger is then present when Tim, Meiko, Emilia, and Pikachu analyze the Fine Park footage and realize that Keith and his Skorupi had been at the park that day and used a balloon filled with R to provoke Charizard into going on a rampage.

In Chapter 8, "Where R Goes", after Keith is arrested, Tim, Emilia and Pikachu discover that he had been working for someone else, and that the three different versions of R had been planted at the Pokémon Carnival, ready to go off during the parade. Due to the R also being planted before GNN cameras, Tim and Pikachu deduce that whoever the mastermind is, they have to be someone who works for GNN. In Chapter 9, "Pokémon Carnival", Tim, Emilia and Pikachu rush to prevent the R from going off at 8:00, when all three different parades converge in the Ryme City square. When Pikachu and Tim discover the liquid R at a snack stand, Roger arrives and talks to them. He states that, since Pikachu is unable to use any attacks, Tim should run away if he feels threatened, before returning to watching the parade.

Once all three types of R are recovered, Frank Holiday arrives and informs Tim and Pikachu that Keith testified to there being one more location where R has been hidden. Tim, Pikachu and Emilia discover a machine inside the clock tower set to release R all over the parade, and the two detectives dismantle it while Emilia leaves to get the police. After shutting the machine down, Tim and Pikachu deduce that, due to Keith's testimony, the culprit being an employee of GNN, and the fact Roger knew how Pikachu isn't able to use attacks, despite Keith being the only person who should've known, that he must be the mastermind.

Roger, while holding Emilia captive, arrives, confirming their suspicions before forcing Tim to turn the valve on the side of the machine, which will reactivate it, by threatening Emilia. In order to keep Roger distracted while Pikachu sneaks up on him, Tim asks why he wanted to smuggle R in the first place, and he states that he wants to seize power over the world. Tim continues to pry on why Roger wants to attack the carnival, and, although annoyed, he decides to answer, as it will be their last conversation. He explains that he wants to test the effects of R on a large group of Pokémon, also explaining that he needed money to fund his plans (presumably the reason Keith had been trying to auction off R in the previous chapter). Emilia comments on how wrong Roger's plans are, but he doesn't care, showing that he still possesses Mewtwo's cells and can make as much R as he needs. Then, he realizes that Pikachu is missing, and the latter jumps on him from behind, forcing him to let go of Emilia.

Roger is enraged at letting his guard down, but arrogantly proclaims that they won't be a match for him since Pikachu can't use electricity, and summons Noivern to carry him out of the tower. A moment later, he and Noivern burst through the wall, Noivern empowered by a more controlled version of R, and begin blasting the machine with Super Sonic to make the vats break and release the R. Tim, Emilia and Pikachu are unable to stop the attack, however, Pikachu manages to summon the power to use Thunderbolt, and overpowers Noivern's Dragon Pulse, zapping it and Roger unconscious. Soon, Roger is arrested for his crimes while everyone reconciles, Meiko commenting that she never would've suspected Roger as the mastermind, but wouldn't have been surprised if it were Mr. Graham (not knowing the latter is overhearing what she's saying). Pikachu also returns Mewtwo's cells to the latter, ensuring that R can never be produced again.

In Pokemon: Detective Pikachu, the 2019 film adaptation of the video game, this version of Roger Clifford is revealed to be a decoy antagonist and a major character, whereas his father Howard Clifford is the main antagonist, with Ditto as the secondary antagonist. Roger, much like supposed late-Harry Goodman, disapproved of Howard’s twisted ideal of transhumanization on merging humans with corresponding Pokémon into Pokémon with former human minds (particularly some of their corresponding partners) by using the R Gas from Mewtwo’s DNA that turned Pokémon into mindless wild beasts, then merge with corresponding humans. As Howard knew Roger will betray for a good reason as Harry did, Roger was tied by Ditto and hidden at Howard’s main office, then being impersonated by the shape-shifting Pokémon to use both Tim and Harry’s Pikachu as a bait to lure Mewtwo out.

When Howard begin to enact his plan after transferring his mind into the captured Mewtwo’s body, Tim found Roger, just as Roger alerts him that Ditto (started out as “Roger”) is behind them. Roger helps Tim fighting off Ditto, but got knocked out by it, until Tim uses amount of R Gas dose on the shape shifting Pokémon, haywire its power and finally passing it out for good. After Tim removed the the neuronic band from Howard’s human head which had his mind possessing Mewtwo’s body, with Ryme City is saved, Roger begin to help the citizens, while also hiring the intern Lucy Stevens as a full-time reporter, order her to announce him will atone his family name, as well as the crime his father committed relating to R Gas incident.

Throughout most of the game, Roger is portrayed as a kind, calm, and openly friendly person. He is eager to meet new people, especially those he hears positive things about, as demonstrated with Tim and Pikachu. He wants to have a good relationship with his employees, such as going out for coffee with them and treating them like friends, even giving them the freedom to do what they want. When Max is revealed to be the one who stole Carina's violin, Roger is deeply disappointed in this revelation and having to call the police. He humbly takes compliments from others like Mr. Graham, and even gets nervous when he begins to show his more angry and bossy side.

However, in the final chapter, this is proven to be nothing more than a facade. Roger was truly a cunning and manipulative sociopath who had no compassion for those around him. At heart, he only desired power and control, with no qualms on what he had to do to get it. He is still very cautious, making sure nobody, not even his henchmen, knew his identity by contacting them via phone or letter, never showing his face. Being the one behind the R incidents, he clearly did not care who or what was hurt/destroyed for the sake of his research, even if it was one of his own staff members. Notably, he directly harms Emilia by taking her hostage to force Tim into reactivating the R machine. He is incredibly arrogant as well, remaining totally confident in himself during the final confrontation, which leads to him letting his guard down and revealing the truth behind his plans. During the aforementioned confrontation, he noted to Tim that it would be "their last conversation", implying that he was going to have him, Emilia, and Pikachu killed or otherwise taken out of the way so that they couldn't reveal the truth (although the former is more likely, since he attempted to eliminate them with Noivern soon afterwards). Despite his cruelty, he seems to have a certain level of respect for Tim's detective skills, although he could be faking this too. 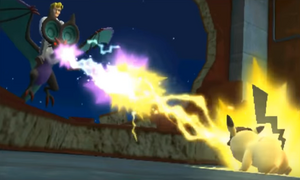 Roger fighting Pikachu.
Add a photo to this gallery

Retrieved from "https://villains.fandom.com/wiki/Roger_Clifford?oldid=3978713"
Community content is available under CC-BY-SA unless otherwise noted.