Drinking and getting high.
Dressing up.
Killing people over minor things.

Varies (depending on episodes).

Roger Smith, also known as Roger the Alien or just known by his first name Roger, is the deuteragonist and secondary antagonist of the adult animated comedy series American Dad!. He is possibly based on Dr. Roger Adelson who was one of his voice actor's professors.

He is an alien resembling a stereotypical gray alien with big oval-shaped eyes, short stubby feet and a chubby waist.

Roger describes himself as a "fey pansexual alcoholic non-human". Speculation exists regarding Roger's sexuality, but the discussion might be moot as he is an alien (his name may come from the word "androgynous" which means having both male and female traits). Roger is sarcastic, irritable, argumentative, disrespectful, impolite, obnoxious, destructive, childish, petty and cruel. He is also a violent and homicidal sociopath with a love for character roleplay. He once convinced Steve Smith he was adopted as his revenge for Steve eating the last cookie.

Roger also has a history of holding grudges as he tried to kill the rest of the Smith Family for insulting him at a comedy roast by starting a gas leak causing an explosion, hiring a hitman to kill them and removing the brakes from Stan's vehicle and writing death threats to Merlin Olsen for seven years after Father Murphy was canceled. Roger is also shown to be a dangerous and scatterbrained sociopath committing many offenses in his various personas. However, there is justification for his behavior as it was revealed his species need to be jerks or their tendencies otherwise build up as bile and kill them.

Roger is an alien and despite his human tendencies he does display superhuman abilities.

Roger's flamboyant speech pattern is a parody of Paul Lynde, although many thought it was akin to Family Guy's Cleveland Brown. He can speak Spanish (though not very well). On his home planet, he was a greeter at a Walmart analogue store called Philaxido. His favorite baseball team is the San Diego Padres. His favorite movie is Miller's Crossing.

Little is known about Roger's past; his planet is never seen or described in-depth, though according to him, it sounds fairly similar to Earth, although Roger claims the climate of his home world is 400 degrees colder than most ecosystems of Earth, with the possible exception of Antarctica. In "The Best Christmas Story Never", he says he landed on Earth 60 years ago at Roswell. In "Of Ice and Men" he mentions that snow reminds him of his home planet, and figure skating apparently exists there; he has also commented that the planet has stores like Walmart (he was once a greeter at one of these places) and colleges. Likewise why he came to Earth is never explained: he does state that the reason he came was to collect a sample of hepatitis, although since arriving he seems to mostly be mooching, and seems in no hurry to go back home (in the pilot he was supposed to try to contact his home world, but got distracted by an "I Love The 80s" marathon). This led to the possibility that Roger is marooned on Earth and his homeworld does not know of his whereabouts. Though it was finally revealed in the episode "the Weiner of Our Discontent" that he believes he came to earth to be "The Decider", seeing of the planet was worth saving or to destroy it. This belief was crushed horribly when he discovered in his spaceship a note that stated that the ship was a test model and he was in it as a "crash test dummy", meaning his own species abandon him on the planet. It is also known that Roger "invented" disco and became a millionaire in the 1970s after he discovered a cassette tape from the future, thereby creating a time paradox, but he lost his fortune after disco died.

Four years prior to the series, he was incarcerated by the CIA in Area 51, when Stan Smith, then an intelligence officer, was on duty at the base. Tired of living in a laboratory, he escaped his holding cell, thus triggering a lockdown investigation. Stan tracked him down in a kitchen and was about to kill him before Roger pleaded for mercy, but the security team riddled the room with gunfire, from which Roger pulled Stan to safety. They slid down a laundry chute into a waiting truck just as a thrown grenade blew up where they previously had been standing. Grateful to Roger for saving his life, Stan offered to repay him in any way at all, obviously leading to his being added to the family. As a means of convincing the family to let him stay, Stan presented him as a birthday present to Steve for his tenth birthday. Hayley and Francine were horrified of him at first sight, as was Klaus, but Steve was delighted to have his own alien. By the start of the series, however, the family seems to have come to terms with him.

In earlier episodes, Roger was unable to leave the house because he was an alien but after putting on a disguises in later episodes, he is able to leave the house anytime he wants.  Roger loves disguises, but some disguises change his personality, creating various personas that Roger is sometime unable to control until he takes off the disguise. Some of these personas are sometimes the reason Roger acts as a villain in some episodes, a notable persona being Ricky Spanish.

In one episode, it was shown that Roger's species need to be mean to others or it would slowly kill them...though it doesn't always excuse what he does. 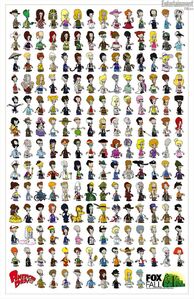 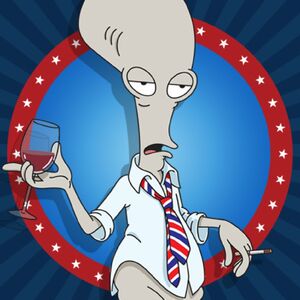 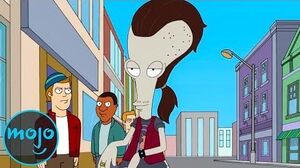 Retrieved from "https://villains.fandom.com/wiki/Roger_Smith?oldid=4133371"
Community content is available under CC-BY-SA unless otherwise noted.