Ghost in a flowerpot

Roger the Potted Ghost is a character from the Yoshi franchise. He makes his debut as boss of the level "The Potted Ghost's Castle" in the videogame Super Mario World 2: Yoshi's Island.

Roger starts out as just an ordinary, lifeless flowerpot, but when the Blue Yoshi arrives in the boss room, Kamek uses his magic to transform the flowerpot into a ghost.

To defeat Roger, the Blue Yoshi must push the flowerpot that he's in into the pit at the other end of his battle arena in the same manner as a regular flowerpot. However, the two green Shy Guys behind him will try to push him in the opposite direction, which will result in the death of the Yoshi if he's pushed too far, as there is also a pit at the opposite end of the arena. Roger can also lunge at the Blue Yoshi to push him back, and spit out blue flames that will force the Yoshi to stop pushing him and get out of the way in order to avoid getting hit. When he's pushed far enough, the green Shy Guys will fall into the pit behind him and won't respawn, leaving the Yoshi free to push him the rest of the way without resistance.

The previous boss is Bigger Boo, and the next one is Prince Froggy.

Roger the Potted Ghost makes a cameo appearance at the beginning of the intro of Yoshi's Island DS, along with all of the other bosses fought in the original game.

Roger appears as a support spirit that makes the fighter resist strong winds. He can either be claimed by summoning him using the cores of Shy Guy and Boo Mario, or fought in a timed stamina spirit battle against a giant male Wii Fit Trainer that is hard to launch and two green Meta Knights. All fighters have lowered jump power and only Wii Fit Trainer has to be defeated to win. 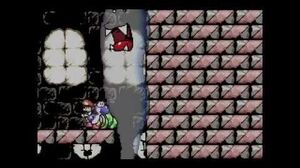