Rogue is a genetically modified Xenomorph Queen, who was made to be male, tame, and an enemy to its own species. He was debuted in Aliens: Rogue.

Rogue was created by a team of human scientist headed by Ernst Kleist in attempt to create a tame Xenomorph that would be used again "feral" Xenomorphs. Rogue was larger and stronger than a Queen Xenomorph, but the Queen was more agile and intelligent. When pitted together in a fight, Ernst is shocked to find that his Rogue cannot stand against a Queen. While it could not stand against her, Rogue easily and brutally slaughtered smaller castes of even aliens. Even several Praetorians at once could not best it.

It was engineered to ignore humans an almost wiped out an entire hive by itself. 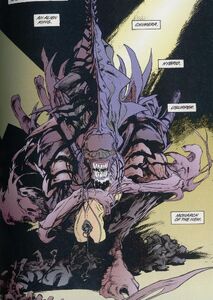