Advancing the goals of the Roidmude uprising.

Minion
Roidmude 097 is a Low-Class Spider-Type Roidmude and an antagonist in Kamen Rider Drive.

097, 073 and 107 were brought by Gold Drive to guard him and the three Roidmude Super Evolved executives (Heart, Brain and Medic) as they performed the Promised Number, which Gold Drive secretly planned to use to charge Sigma Circular so it could trigger a second, worldwide, Global Freeze. Gold Drive had secretly tipped off the Special Investigation Unit in order to lure them there so he could eliminate all his enemies in one go.

After the Kamen Riders and SIU showed up, the three Low-Class Roidmudes attacked them to hold them off while the Promised Number occurred. After Brain sacrificed himself to save Medic from the ritual by substituting himself as a countercurrent for the redirected energy, 097 attacked the Kamen Riders again, but was held off by Mach. 097 was destroyed by Deadheat Mach using the Mach Driver Honoh to perform a Full Throttle, perishing alongside 073 and 107. 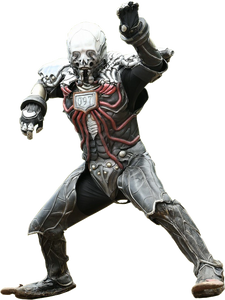