After Roidmude 102 was seen near a crowd of civilians, Shinnosuke and Kiriko were alerted and responded to the Roidmude sighting. They found 102 strangling a civilian up against a wall. Drive then attacked 102 and rescued the civilian, causing 102 to turn its attention to the Kamen Rider. After beating down 102 in his base form, Drive switched to Midnight Shadow to deliver a finishing attack. Performing his Full Throttle finisher, Drive destroys 102. Shortly after 102's death however, the timeline was altered by Shocker to a future where they ruled over humanity. 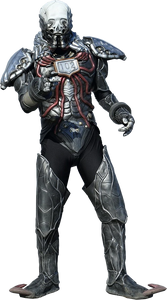 Roidmude 102
Add a photo to this gallery

Retrieved from "https://villains.fandom.com/wiki/Roidmude_102?oldid=4167448"
Community content is available under CC-BY-SA unless otherwise noted.