Villains Wiki
Register
Don't have an account?
Sign In
Advertisement
in: Mature, Call of Duty Villains, Trickster,
and 18 more

Asset of the Brazilian Militia

Help Rojas in his plans (both succeeded).
Evade capture.
Kill the soldiers of Task Force 141 (both failed).

Rojas' Assistant, better known as Rojas' Right Hand man, is a minor antagonist in the 2009 video game Call of Duty: Modern Warfare 2, and appears in the mission "Takedown". He is the right hand man of the Inner Circle's arms dealer Alejandro Rojas whom is interrogated by Task Force 141 during their hunt to eliminate Vladimir Makarov.

Not much is known about the assistant, but he became the right-hand of Alejandro Rojas, an arms dealer who later become involved with the Inner Circle. The assistant also became an asset of the Brazilian Milita once Rojas started to supply the group, but maintained a rocky alliance with them.

In the intention of finding Makarov, General Shepherd send Task Force 141 to Brazil, Rio de Janerio to find Rojas' right hand man to interrogate of Rojas' location. They followed the three Militia who were send to capture the right hand man.

Rojas' assistant falsely surrendered but tricked the Militia and killed them and attempted to kill Soap and Roach but manage to kill Merlin (the Driver). He later trying to escape to the alley of reaching the Favela but got shot at the leg by Roach. After captured by the 141, Soap and Ghost are preparing to torture Rojas' assistant for the location of Rojas.

His status is unknown, but he was presumably killed by Soap and Ghost once he gave them information, or the two left him behind to be found, or released him to his freedom after torturing him. 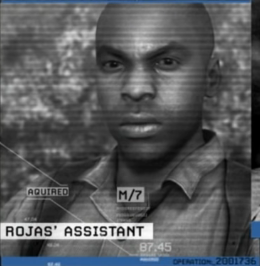 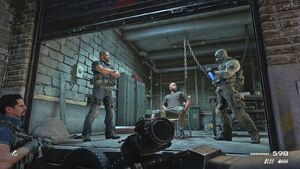