King Roland (by his minions)

Use the love potion to make Marianne fall in love with him again so he can become in the new king of the Fairy Kingdom and be given an army (failed).

Roland is the main antagonist in the 2015 animated film Strange Magic.

He was voiced by Sam Palladio.

At the beginning of the film, Roland at first appeared to be excited about his upcoming marriage with Marianne, the future queen of the Fairy Kingdom. However, he was seen kissing another fairy girl behind her back and as a result, Marianne called off the wedding. During the Spring Ball, it was revealed that the real reason for the marriage was so he could rule the forest and more importantly, to be blessed with the King's army. In order to do that, Roland sends an elf named Sunny (who is the best friend and secret admirer of Marianne's sister Dawn) out on an errand to the dark forest so that the sugar plum fairy would make up a bottle of love potion.

While Roland planned to use it onto Marianne at an air festival (in order for her to fall in love with him again), The Bog King and his minions crash the party and then abducts Dawn. He grew furious after Sunny's "errand" resulted Marianne into beginning the rescue mission by herself.

Later on, Roland is granted a small army by the King and travels into the dark forest. At the Bog King's throne room, he demanded that The Bog King would hand Marianne and Dawn over in exchange for giving him the love potion. After a brief fight, he signaled, "GO", and had a few soldiers tear the castle down. In the end, he blows the potion into Marianne's face and hoped to "earn" her love in an instant. However, due to her true feelings for the Bog King, the potion did not take effect. Marianne then punches him in the face, causing Roland to fall off a cliff and get hit with the love potion.

During the credits, Roland, who apparently survived the fall, was seen kissing a bug in a valley after apparently falling in love with it.

Roland with his then fiancée Marianne. 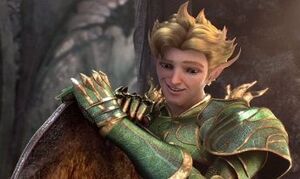 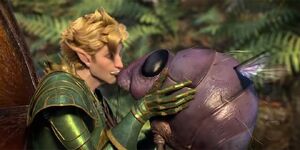 "What are you trying to say?"
Add a photo to this gallery 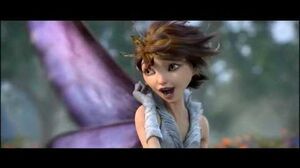 Retrieved from "https://villains.fandom.com/wiki/Roland_(Strange_Magic)?oldid=3552534"
Community content is available under CC-BY-SA unless otherwise noted.