Leader of the Paladins

Roland Cox is the main antagonist in the 2008 movie Jumper. He the leader of Paladin, an organization that hunts down and kills Jumpers by any means necessary.

Roland is one of the most formidable field commanders of the Paladins. Like all Paladin members, he seeks to kill all Jumper (humans with the ability to teleport anywhere) until all of them were extinct due to Paladin believed that Only God should have the power to be all place at all times, and deemed Jumpers as abominations to the world and a disgrace to God. It appeared that he was recruited as Paladin member since his childhood given to his dedication to Paladins' cause.

He has been trying to kill Griffin O'Connor for a long time but has been unsuccessful (he has badly injured him, however). Griffin has also been trying to kill him but Roland is the most skilled of all the paladins and is very difficult to kill, even for Griffin, who specializes in killing paladins.

Roland hunts down David Rice (who is a jumper) and badly injures (or kills) his father. Roland is forced to fight both David and Griffin at once when the two jumpers team up. Roland traps David with electric wires and fights Griffin all out. He gets knocked through a wall and then dodges a huge bus that was thrown at him by Griffin. Roland and Griffin then go through a jump scar into Millie's apartment (which is on fire) and continue to fight each other. Neither one can kill the other but Griffin manages to grab the paladins machine and escape, preventing Roland from coming back to the lair. Roland then pulls Millie into the apartment through the scar, holding her as a hostage. After David incapacitates Griffin in a fight, David goes to save Millie.

Roland pins him to the wall and is about to kill him but David jumps the entire apartment to the river and then to the library. Roland is badly injured and David then jumps him to an abandoned cave in the Grand Canyon. David leaves him there and Roland is trapped. His ultimate fate is unknown, but it is unlikely that he managed to escape, so he probably died due to dehydration and lack of nourishment.

Sadistic, cruel, and no-nonsense, Roland is the most dangerous and skilled Paladin that can be considered as powerful adversary to dealt with. Roland has extreme confidence in his own abilities and skills to combat Jumpers to the point of arrogance. Unfortunately for Griffin (and later David at the beginning of the film), his confidence is well founded as he and David were incapacitated and nearly killed by the seemingly unbeatable Paladin. Griffin even unable to defeat Roland in their fights though David eventually able to do such feat in the end. Like other Paladins, Roland has dedicated himself to kill any existing Jumpers, even those whom relatively young as they were easier to killed and did the same on their family or their loved ones, as they not only posed the threat for the Paladins but also due to them possibly the Jumper themselves.

Like all Paladin Members, Roland Cox armed himself with these gadgets: 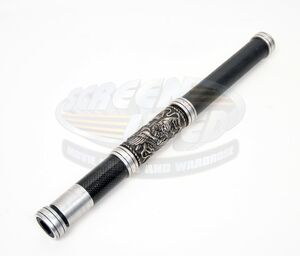 Jump-Scar Detecting Spray
Add a photo to this gallery

Retrieved from "https://villains.fandom.com/wiki/Roland_Cox?oldid=4290733"
Community content is available under CC-BY-SA unless otherwise noted.