Kin of the Great Ones

Evolve into a Great One (succeeded).

Rom, also known as the Vacuous Spider, is a minor antagonist in Bloodborne. She is a kin of the Great Ones stationed by Kos to protect the barrier between dreams and reality, hiding the many horrors that the paleblood moon should bring.

Despite her title, Rom resembles a gigantic pillbug or a caterpillar rather than an arachnid. She has a silverfish-like tail and a bulbous body from which vegetation appears to be growing, possibly Coldblood Flowers. Her face resembles a chunk of pumice and is covered in eyes, suggesting its connection to the Great Ones.

Her name - "vacuous" - suggests that Rom is brain-dead, to her thoughts are so far beyond human understanding that Rom cannot communicate her findings to humanity.

Apart from when the Hunter attacks her, Rom is completely docile.

Rom has the power to summon her offspring who fall from the sky when she is first attacked. At a distance, Rom can shoot large ice crystals skyward that land on the hunter. She can also create a magical blast from arcane magic. If attacked long enough, Rom can teleport to another part of the dimension, which spawns another batch of her children.

Rom was once a scholar of Byrgenwerth whom at some point went through metamorphosis into Kin courtesy of Kos, according to the dialogue given by Micolash. Since becoming a Great One, all methods and rituals used to achieve this have been lost to humanity. Since then, Kos has appointed Rom with the task of protecting humanity from the eldritch, casting the world in illusion as to hide the information from an unsuspecting public. 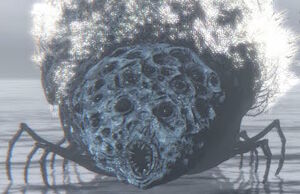 A closeup of Rom. 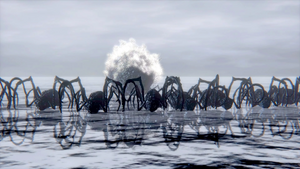 Rom guarded by her spiders. 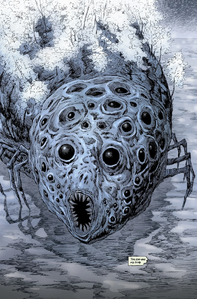 Rom in the comic Bloodborne: A Song of Crows.
Add a photo to this gallery 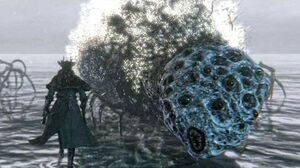 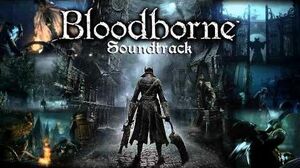 Bloodborne Soundtrack OST - Rom, The Vacuous Spider
Add a photo to this gallery

Retrieved from "https://villains.fandom.com/wiki/Rom?oldid=3767007"
Community content is available under CC-BY-SA unless otherwise noted.