Founding Leader of the Clowns

Conspiring against the world.

Have "the last laugh"/cause chaos and anarchy.

Roma Hoito (帆糸 ロマ, Hoito Roma) is one of the recurring supporting antagonists of the anime/manga series Tokyo Ghoul. She was originally a waitress at the restaurant Anteiku, but was really a spy from the secret ghoul organization known as the Clowns and served as its founding leader, though she kept such information a secret as a means of continuing the "game" she and the Clowns were playing.

She initially appears as a fragile young woman, but is actually known as the Dodgy Mother (ダッジマザー, Dajjimazā) who famously fought Tsuneyoshi Washuu when she was younger and survived.

She was voiced by Suzuko Mimori in Japanese and Tia Ballard in English.

When she was a child, Roma was left to defend for herself as her parents had died sometime when she was young, though she has no memories of them and they presumably passed when she was very young. She grew very hungry and suppressed this urge by eating rotten flesh until she was seven years old, but grew a desire for fresh meat that she was unable to suppress. This lead her to killing a human and the killing marked the beginning of a life where she was constantly in the presence of death. She continued to kill more humans and even other ghouls until she was recognized as one of the strongest of her kind, though she slipped into a state of pure boredom when she passed into a state of insignificance among the ghoul community.

In this state, Roma discovered that many humans lived lives of insignificance and saw them as hidious and frail, but they were joyful and that angered her. She began to view the world as a circus for her amusement and satisfaction, which lead her to forming the Clowns and gathered ghouls who shared a similar viewpoint. She earned the title of Dodgy Mother by the C.C.G. either before or after she formed the Clowns and was given a SSS rating, making her one of the most dangerous ghouls around. She faced its future chairman, Tsuneyoshi Washuu, and lost, but managed to survive and her defeat became his most notable achievement. After this, she was captured by the C.C.G. and was imprisoned in Cochlea, a ghoul prison, where she was given the nickname of Gypsy and a SS rating

During her time in Cochlea, she enjoyed her solitude after her "wild part" and was in a cell nearby the one housing Shikorae and he was subjected to horrific torture by Shiki Kijima and overheard his screams and enjoyed them. Roma was eventually freed from Cochlea during the Second Cochlea Raid by the Aogiri Tree, a ghoul terrorist organization, and her cell was opened by Aogiri Executive, Tatara, who requested that she join them, but she refused due to ideological differences and escaped before she could be kidnapped and forcibly conscripted into Aogiri's ranks.

After escaping Cochlea, Roma went on the run and regrouped with the Clowns where she made it to HySy ArtMask Studios ran by fellow Clown, Uta, who gave her a haircut. He informed her of the One-Eyed Ghoul working at Anteiku, Ken Kaneki, and this caused her to contemplate working there part-time and he said that he'd introduce him to her. Uta also told her of the group's newest member, Souta.

After hearing about Kaneki, Roma transferred from the 19th Ward and claimed that she heard of Kaneki's act of carnage in the 7th Ward's Ghoul Restaurant. She expressed a desire to meet him because of this.

Roma was with the other Clowns at HySy ArtMask Studios in the 4th Ward during the Own Supression Operation by the C.C.G. was underway. When news got out of Kaneki's supposed death, the Clowns celebrated at the shop.

During the Auction, Roma was with Nico observing the Quinx Squad from a distance when she recognized their leader, Haise Sasaki. She knew it was Kaneki, but was disgusted by his idylic lifestyle and wanted the old Kaneki back, the one she admired and wanted Sasaki "dead". Nico criticized her twisted concerns, but she said that the two of them would be having fun at the upcoming Auction.

Roma appears as a tall, slim, beautiful young girl with short hair and a small clip on the left side of her bangs. She has Sienna Red eyes and her hair is the exact same color in the anime. As a waitress, she wore a standard issue Anteiku waitress uniform and her eyebrows are casted down when apologizing. In her clown gear, she wears a cartoon-style rabbit mask clown themed decorations all around it and a star on the left eye. It covers half of her face.

Roma has two sides to her personality as a member of the clowns.

When working at Anteiku and possibly in other places, she appears as a clumsy, absent-minded woman who's always breaking dishes. This is always causing Nishiki to get mad and scold her. However, her real personality is revealed to be much more cruel. She loves tragedies and is very sadistic and uncaring. She's attracted to and obsessed with Kaneki's current status and wants him to regain his memories so she can love and adore the ghoulified Kaneki that she finds so attractive. She appears ticklish as she is seen laughing when a fellow clown member tickles her at the auction. 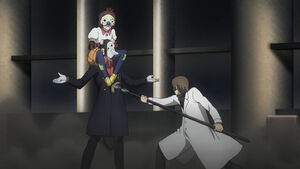 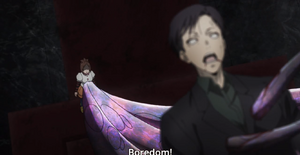 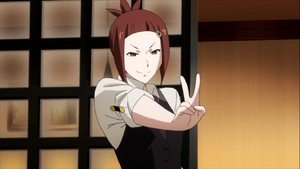 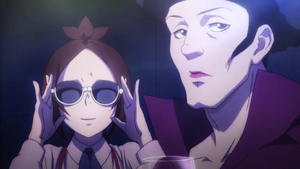 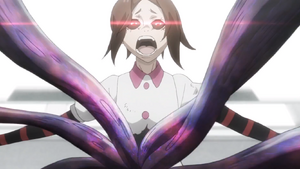 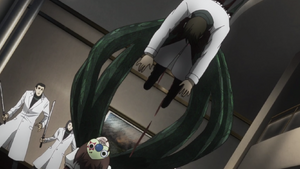 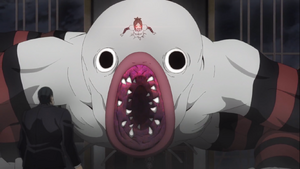 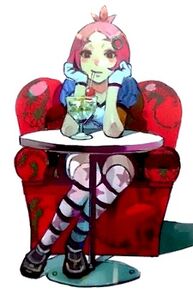