In Grand Theft Auto IV, he was voiced by the late Milton James, who also voiced the United Liberty Paper Contact in the same game, Senoh in Street Fighter II: The Animated Movie, CABAL in Command & Conquer: Tiberian Sun and Moneybags in Spyro 2: Ripto's Rage. In The Lost and Damned, he was voiced by Yevgeniy Dekhtyar.

In Grand Theft Auto IV, he only appears in the mission, "Hostile Negotiation". In Grand Theft Auto: The Lost and Damned, he only appears in the mission, Roman's Holiday. He orders Johnny Klebitz to kidnap Roman Bellic or else, he'd kill his girlfriend, Ashley Butler, from unpaid debts. Johnny meets him at an old warehouse in Bohan when he and a black biker named Malc deliver Roman. There, the kidnapper constantly abused and threatened Roman into telling his cousin, Niko Bellic's location.

However, Roman wouldn't do it so he was about to kill him. However, Niko rescued Roman from his kidnapper by killing the kidnapper. He also sent a photo to Dimitri Rascalov in order to tell him that his work was "done" and Dimitri sent it to Niko in order to get some sort of message across. 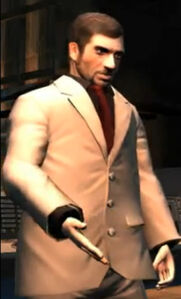 Roman's Kidnapper as he appears in GTA IV.