To aid the immortals (Partially failed).

Roman Goodwin (Rudger Goodwin, or Rudger Godwin in the Japanese version), is a major antagonist in Yu-Gi-Oh! 5Ds and is one of the Dark Signers, apparent the leader and First Dark Signer at that.

Wielding an Insect oriented "Spider" deck and the Mark of the Spider, Roman was originally a scientist and one of the five Signers bearing one of the five birthmarks of the Crimson Dragon, the mark which represented the head of the Dragon implying that he was the reincarnation of the original leader of the Signers and was meant to be the leader in the current age as well. He is the older brother of Rex Goodwin. He is also the archenemy of the main protagonist, Yusei Fudo for killing his parents and making him an orphan.

Roman's actions make him one of the more prominent antagonists of Yu-Gi-Oh! 5Ds, being responsible for the Zero Reverse disaster which created Satellite as well killed Yusei's father, Dr. Fudo, and his various attempts on the Signers do to his own abilities made him the most recurring Dark Signer challengers as the Shadow Drones under his command used some of his cards as well.

He was voiced by Marc Thompson.

Roman and his younger brother Rex Goodwin were scientists working for the R.R.D. division of Kaiba Corporation. The two siblings were inspired by Professor Fudo's project, the Ener-D (Momentum in the Japanese version), which was intended to be a self-sustaining power plant that would produce unlimited clean energy for the world. The Goodwin brothers joined Dr. Fudo's research as his lead assistants, initially, the project progressed smoothly, however whenever they did a test run on the device strange weather phenomena and tremors occurred in the city. Dr. Fudo came to the conclusion that the Ener-D was responsible for the strange occurrences and that the project was too dangerous to continue. Roman, refusing to give up on the project, searched occurrences similar to what was happening in Domino City, taking him to the Nazca Lines. Once he traveled there a man from an organization known as Yliaster convinced Roman that the Ener-D must be completed and that the birthmark on his arm sealed his destiny as a bearer of the Crimson Dragon. After returning to the facility and Roman looked into the light of the Energy Reactor and then saw the battle between the Crimson Dragon and the Earthbound Immortals. The sponsors funding the Ener-D then fired Dr. Fudo for attempting to shut down the research and appointed Roman as the head researcher of the project. Roman slowly became insane and decided to become a Dark Signer knowing that the conflict between the Crimson Dragon and the Earthbound Immortals would repeat itself soon.

Dr. Fudo insisted on shutting down the Ener-D before a disaster would occur but Roman revealed the cards "Stardust Dragon", "Red Dragon Archfiend", "Black Rose Dragon" and the "Ancient Fairy Dragon" cards, which were the keys to activate the Energy Reactor's control units. Dr. Fudo managed to take three of the cards and flee, leaving behind "Ancient Fairy Dragon" when he was wounded by Roman's henchmen. Roman then severed his arm with the Crimson Dragon birthmark and handed it to Rex, he used the last of his sanity to make his brother promise to find the Signers so that they could stop him. Roman forcefully activated the malfunctioning Ener-D, which spun counter-clockwise, producing a massive amount of negative energy that overloaded the reaction. The reactor exploded causing a catastrophic earthquake that severed a chunk of Domino City from the rest of the continent turning it into the "Satellite Island", the immense negative energy and tremendous earthquake awakened the Earthbound Immortals.

Roman was then reborn as a Dark Signer with the Spider birthmark, he turned the ruins of the R.R.D. division into his base of operations as he prepared for the revival of the Earthbound Immortals while also knowing that Rex would eventually gather the Signers. The earthquake caused by the explosion of the Ener-D came to be known as "The Zero Reverse" and the media covered up the incident as a natural tragedy so that one would know the truth.

After the Fortune Cup ended, Roman possessed Grady and Trudge, in order to test the Signers, Yusei Fudo and Jack Atlas.

Roman appears when the Signers along with Mina, Leo and Trudge venture to Satellite and meet-up with Martha, imposing a Duel. Jack wants to but is stopped by Yusei as he tells him that it's too dangerous to duel here, especially if a geoglyph appears. Jack is instructed to take Martha and the kids somewhere safe, while Yusei, accompanied by Akiza, faces Roman in a Shadow Duel in another location.

However, three of the children decide to watch the Duel. As the Duel unfolds, Yusei and Akiza notice two kids near the flames caused by the geoglyph and wonder how they got in when they are not signers. As Roman prepares to Summon his "Earthbound Immortal", "Uru", Yusei and Akiza fear that once it's Summoned it could use the kids' souls as sacrifices. Luckily, Jack appears and uses his birthmark to stop the kids from being sacrificed. Yusei eventually manages to gain the upper hand in the Duel. As a final insult to Yusei, Roman uses evil magic to flee and force Rally to take his place. Rally manages to destroy Uru, but doing so apparently costs him his life.

Roman, along with the other Dark Signers later appear before their rivals, the Signers to begin their final battle. For the meanwhile, each of his comrades waits at each of the control units of the Original Energy Reactor with the purpose of dueling against their correspondent Signer rival. As for Roman, he awaits within the place where the system itself resides. After Devack's defeat at the hands of Luna and Leo, he kills Greiger in order to make him into a Dark Signer by pushing him over the Original Energy Reactor. Roman's mark seems to be causing him anguish as it escalates up his arm. But he is confronted by Rex Goodwin, who Duels him. Rex loses on purpose in order to be reborn as a Dark Signer like his brother.

Yusei and his friends enter the crater in the B.A.D., where they confront Roman. Although Yusei wins, Roman proceeds to tell Yusei that things have not finished yet, as an the King of the Underworld will soon be born. Before Roman dissolves, he detonates a bomb in his left arm, blowing up the bridge and sending Yusei falling into the depths of the Ener-D Reactor.

Roman is the fourth Dark Signer to be defeated. When Rex is finally defeated and the King of the Underworld is destroyed, Roman and Rex are the only Dark Signers to not return to life.

In season 4 it is revealed by the Three Emperors of Yliaster that the organization manipulated Roman into blowing up the Ener-D in an attempt to erase Ener-D from existence, as in the future the reactor would cause the destruction of mankind. Their plan however failed when a second Ener-D was built and the awakening of the Earthbound Immortals was an unintentional side effect of their failed scheme to destroy the Ener-D.

Roman's "Spider" Deck is an Insect-type deck with his strategy focused on changing the Battle Position of monsters on the field and taking control of them with Earthbound God Uru. His Deck also contained support cards specific to Earthbound Gods (Earthbound Immortals in the localization hence the names) such as "Earthbound Whirlwind and "Roar of the Earthbound". The video games expand on his deck to include more than what was seen in his duel with Yusei.

Roman is the Dark Signer who represents the Earthbound God (Jibakushin) Uru. A spider-like deity of the netherworld that like regular spiders possess eight legs. 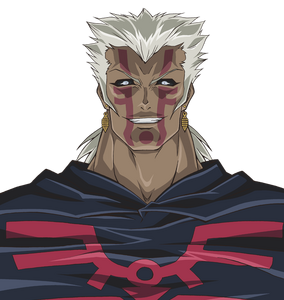