Ronald "Ron" Perlman is a recurring antagonist in Paradise P.D., appearing in the episodes "The Father, The Son, and the Holy Post-It Note" and "PARAD-ISIS". He is a depiction of the real-life movie actor, Ron Perlman, only he's portrayed as a neanderthal, who sits on the other side of the fourth wall, watching Paradise P.D. in anger, getting offended by every joke the show makes about him.

He is the leader of The International Society of Insulted Selebrities, a terrorist organization of celebrities who were offended by Paradise P.D. and plot to get the show cancelled by any means necessary.

He is voiced by Dana Snyder.

In "The Father, The Son, and Holy Post-It Note", Ron Perlman appeared several times in a running gag, watching Paradise P.D. from the other side of the fourth wall in anger as they made fun of him. Thester Carbomb IV joked that Ron Perlman came from The Caveman Islands, which angered Ron Perlman. This was shortly followed by Gerald Fitzgerald saying that if he wanted a idiotic Neanderthal to do his work for him, he'd have hired Ron Perlman. Ron Perlman got so mad about this that he wrote an angry letter to the writers of the show, chiseling it into a slab of rock. Later, Ron Perlman laughed at a dirty joke Stanley Hopson told about Bob Barker and thought that maybe the show wasn't so bad after all. However, this joke was immediately followed by Bullet attacking Ron Perlman once more, calling him a classless Neanderthal who only laughs at low-brow humor, something that infuriated him. Later on, Ron Perlman broke into the TV show and drove a Flintstones car to crush Dusty under it.

In "PARAD-ISIS", Ron Perlman got mad at yet another joke at his expense on the show and went to the Netflix executives themselves, to demand they cancel Paradise P.D.. The execs refused, but they raised him a better offer to give him a Netflix comedy special. Ron Perlman didn't want this but he ended up getting one anyway, where he told a bunch of jokes about abusing women and also got a show called "Comedians in a Cave Getting Concussions", where he slaughtered Jim Gaffigan in cold blood for no reason. Ron Perlman was fed up with his complaints not being responded to so he decided to take matters into his own hands and start an organization called The International Society of Insulted Selebrities, which was basically an ISIS stand-in that vowed to destroy Paradise P.D. for making fun of them. They tried to blow up the wedding chapel, where Kevin and Gina Jabowski were getting married so that all of the characters would die, but Gina attacked them all and killed every member of ISIS, also kicking Ron Perlman through the cross, crucifying him. 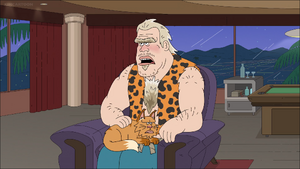 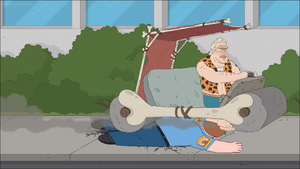 Ron Perlman runing over and crushing Dusty Marlow in his caveman car. 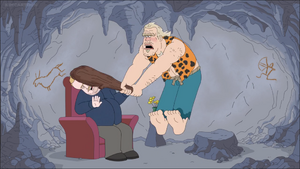 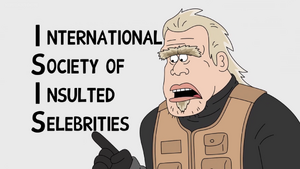 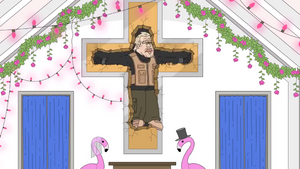