The Saint of Death

Hunting down and murdering immigrants

Continue murdering immigrants without getting caught

Frame Omar Morales for his crimes (both failed)

Ronald Boyd is the main antagonist of the Criminal Minds episode "A Rite of Passage". He is the Deputy Sheriff of Terlingua, Texas, and a serial killer of illegal immigrants.

He was portrayed by Mike Doyle.

When Boyd was younger, his father died in an accident at a Golden Harvest company barn. Boyd later injured his leg in at ATV accident when he was eighteen.

At some unknown point Boyd decided to become a serial killer, implicitly due to racism. He would stake out the desert near the US-Mexico border, specifically a tunnel used by illegal immigrants. When he found an immigrant family he would target the weakest member of the group, typically a child or elderly person, and chase after them on his ATV while wearing a mask with a skull painted on it. When he caught up to them he would kill and behead them with a machete and bury them on his property. When word of the disappearance of immigrant families spread around the community locals began to suspect it was the fault of Santa Muerte - Mexican Saint of Death.

After Sheriff Eva Ruiz was transferred to Terlingua and began to investigate Boyd's murders, Boyd hatched a plan to dispose of her and pin her murder and all the others on Lugo Cartel leader Omar Morales.

A Rite of Passage

Boyd is first seen wearing his mask and chasing down and killing an immigrant singled out due to old age on his ATV before placing his severed head in a cooler with two others. The cooler is later found when a biker accidentally knocks it over. Morales is immediately arrested due to the Lugo Cartel being known to keep victims heads in coolers. Sheriff Ruiz, not convinced of Morales's guilt, calls in the FBI's Behavioural Profiling Unit to assist in the investigation.

Boyd initially assists in the BAU's investigation, and watches Morales's interrogation as he explains the much more brutal way he would kill his victims than decapitation. With no evidence against him, the Sheriff's Department release Morales. The following night Boyd watches an immigrant family running through the desert before chasing down and killing the father after he stays behind due to exhaustion. He then leaves the victim's decapitated head outside Ruiz's house in an attempt to intimidate her.

The BAU manage to track down the family of the latest victim and interrogate them. The child mentions seeing "the sun" (referring to a picture on the outside of the Golden Harvest barn where Boyd waits for his victims), intriguing Ruiz and worrying Boyd. Concerned that Ruiz is getting too close to the truth Boyd lures her to the Golden Harvest barn in order to kill her. During their meeting Ruiz hears Boyd complaining about his leg injury and realizes he fits the BAU's profile of the killer (a male aged 30 - 40 with a physical handicap who is following the investigation). Boyd confesses to everything and Ruiz attempts to draw on him but is shot dead. Boyd then mutilates her corpse in the way Morales described during his interrogation in order to frame him.

After the discovery of Ruiz's body Boyd and Deputy Clyde Gentry go to the Lugo Cartel headquarters to arrest Morales. Upon arriving Boyd immediately pulls out his shotgun and kills several cartel members before shooting down a fleeing Morales. When Gentry asks him why, Boyd replies "He killed two cops" and shoots Gentry dead with his sidearm. He then places the gun in Morales's hand in order to frame him. Unbeknownst to him, the BAU have concluded that Morales had no reason to kill Ruiz since she was the only person who didn't want to arrest him for the murders and now suspect Boyd since he was the only person other than them and Ruiz who heard Morales's description.

The BAU attempt to call Gentry and warn him about Boyd, not realising he is dead. Boyd picks up Gentry's phone impersonating him and, upon hearing he is the prime suspect, flees back to the Golden Harvest barn and arms himself with an M4A1 assault rifle. The BAU track him to the barn, at which point he opens fire on agents Hotchner and Rossi before attempting to escape on his ATV. An SUV containing agents Derek Morgan and Emily Prentiss cuts him off and Morgan shoots Boyd through the windshield with an MP5A3, blowing him off the ATV and killing him. 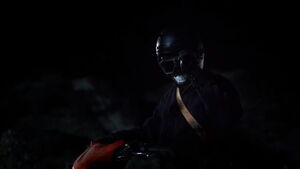 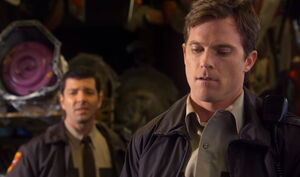