Doing his job as a Grim Reaper (harvesting souls).

Ronald Knox (ロナルド ノックス, Ronarudo Nokkusu) is a Grim Reaper, sent to work with William T. Spears as an extra personnel. Occasionally, he works as the subordinate of Grell Sutcliff. He serves as a minor antagonist in the manga and anime series Kuroshitsuji/Black Butler, specifically during the Luxury Liner arc.

He was voiced by Kenn in the Japanese version, and by Joel McDonald in the English dubbed version.

Ronald is a young man with yellow-green eyes and short blond hair that is dyed black in the bottom half of his hair. He styles his hair in a wavy fashion, bringing a cowlick to the top right.

Ronald wears thick-framed, pentagonal-shaped glasses, and a watch on his right wrist. He dresses in the customary formal fashion, sporting on a black suit, tie, gloves, dress shoes, and occasionally a hat.

Ronald is a rather laid-back, easygoing, and benevolent Grim Reaper, who apparently has problems with arriving on time. He often seeks to accomplish his duties as swiftly as possible, as shown when he says he has never been one for overtime, and when he expresses his envy toward William T. Spears and Grell Sutcliff, claiming that they have gotten "easier" jobs to complete. Despite his unenthusiastic and lackadaisical attitude, Ronald is willing to work hard, having previously declared that he will work to his best potential. Ronald is also very arrogant and manipulative.

Moreover, Ronald is interested in partying, as he shares with William that he would like to finish a job quickly because he has a party to attend to afterwards. He also comes across as a ladies man, commenting that he has received his Death Scythe legally modified by flirting with the receptionist; and offering to treat Mey-Rin to a drink upon their first encounter. 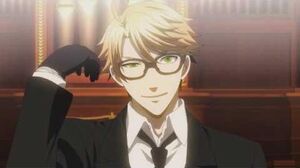 Retrieved from "https://villains.fandom.com/wiki/Ronald_Knox?oldid=3738760"
Community content is available under CC-BY-SA unless otherwise noted.