Co-owner and Head of security of Paddy's Pub

Getting wrapped up in the gang's expeditions.

Ronald "Mac" McDonald is one of the five main protagonists of It's Always Sunny In Philadelphia. He is a one co-owner and sheriff of Paddy's Pub and generally the pub's most active manager. He is roommates with his best friend from high school, Dennis Reynolds, and has been best friends with Charlie Kelly since childhood. Mac is a member of The Gang which also includes Dee Reynolds and Frank Reynolds.

Mac gets upset at injustices, but will pounce on any opportunity he sees as a fair chance to bang or make money. He was proud of his body and weight gain during Season 7, and is secretly ashamed of returning to his regular size.

He is portrayed by Rob McElhenney.

Mac's most outstanding trait throughout the series is that he is, as Dennis eventually realises, "in complete denial about absolutely every aspect of his life". Mac also constantly seeks the acceptance of others, especially his parents, but his over-earnest efforts make him come off as an asshole.

Mac is highly competitive, and is unable to control his competitiveness. For example, when he learned that Charlie and the McPoyle brothers were possibly sexually molested by their—and Mac's—elementary school gym teacher, he feels rejected and worries that he is somehow inferior for having not been molested himself. He proceeds to research why he didn't get molested, stating that, "If the McPoyles got blown, and Charlie got blown, then why didn't I get blown?"

A Catholic, Mac is the only member of The Gang to profess a religious faith. In The Gang Exploits a Miracle, Mac fears that the Lord show his wrath if they continue to exploit the water stain in the bar. Throughout the series Mac refuses to wear a condom during sex, because as he explains to Charlie he went to Catholic school. Though Mac seems to care more about issues such as abortion, community activism, and parenting than the rest of The Gang, his views on such subjects are invariably twisted, ignorant, or prejudiced, and his actions regarding them are always hypocritical and selfish. For instance, after pretending to be adamantly pro-life in order to attract a female activist, Mac later demands that she get an abortion when he thinks she has become pregnant by him. In another instance involving the transgender woman Carmen, Mac discovers that she has married and had the operation to remove her penis. He then belittles Carmen and her husband by quoting the Bible to them and calling them "gay"; however he only reacts so because he expected Carmen to call him once she had the operation so they could date again. Mac constantly drinks alcohol like the rest of The Gang and abuses other substances, such as poppers and glue.

Throughout the series there have been insinuations that Mac is a closeted gay man. This is manifested by his obsession with men's physiques and his reactionary religious views on homosexuality. In the final scene of the season 4 episode "Mac's Banging the Waitress," Charlie says to Dennis, "Do you still get the feeling he wants to bang us? That's what this is all about" after Mac tries to demonstrate how "badass" he is by falling from the roof onto a pile of mattresses after lighting fireworks taped to his jacket that fail to ignite. In the season 9 episode "Mac Day," Charlie says, "I know we've never said this as a group, but Mac's gay," to which the rest of The Gang agrees readily. In the same episode, The Gang talks behind his back about how he got an erection when talking about the wrongs of homosexuality, with Frank saying that you can't miss it, and for his special day "Mac Day", he wanted the gang to grease up some men, and they noticed in that moment once again, he had an erection.

Mac also works on a video series called "Project Badass", where he performs dangerous and reckless stunts where most of the time he wears a motorcycle cycle helmet and/or is driving a motorcycle just to show how "badass" he is. He also has a cousin from the country called "Country Mac" who appears in the episode "Mac Day". Country Mac is everything Mac desperately tries to convinces himself is. When Mac is trying to film a video of him jumping from a bridge into a river for his Project Badass series, he reveals that he won't actually jump and will just edit it to make it look like he jumped. Country Mac actually literally jumps off the bridge into the lake without spilling his can of beer, and Mac tries to leave him for dead until he sees that he's unharmed. The Gang is extremely amazed at Country Mac, but Mac insecurely says that what he did reckless and dangerous. Not only is Country Mac badass, but he's also openly gay and says he's "loud and proud". The Gang decides to trade Mac for Country Mac, but as he's driving away on his motorcycle, he falls off it and dies. The Gang has a funeral for him at Paddy's, but Mac says he'll burn in hell for all eternity for being gay. Mac also has another openly gay cousin named Brett who appears in the first episode of the series "The Gang Gets Racist".

Mac has come out of the closet a couple of times throughout the series, but then quickly goes back into it. In the season 12 episode "Hero or Hate Crime?", he finally comes out of the closet for good at the end of the episode and The Gang is happy for him. Although it was due to selfish reasons. When a piano was about to fall on Mac and crush and kill him, Frank said "Look out faggot!", which is a hate crime. The Gang ends up going through several lawyers, and Mac claims that he's not gay to them, but Dennis tries to prove it by bringing his exercise bike to the office called the "Ass Pounder 4000". This has a large dildo attached to it that pops up up while you're using the bike, and it looks like it's penatrating into your anus. Mac claims that the dildo is a "fist" and it punches you back up when you take a breather from exercising on the bike. The lawyers end up coming to the conclusion that Frank committed a hate crime by calling Mac a faggot and try to make him pay a fine to Mac, but Mac says he's not gay. They then say that if he isn't gay, then Frank didn't commit a hate crime and he wouldn't get the money, then Mac says he's gay and comes out of the closet for the money. The Gang is frustrated at him, because it's a pattern and they know he will go back into the closet, but Mac says that he won't and that it feels good that he can be himself. 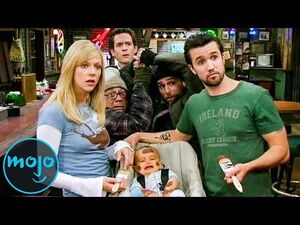 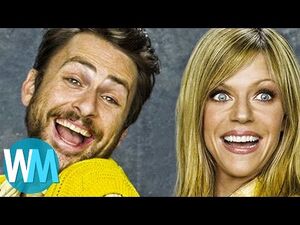 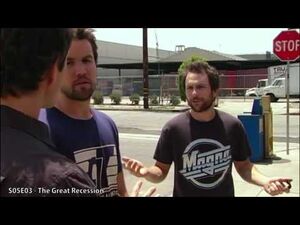 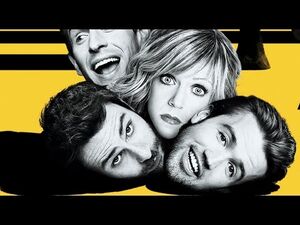 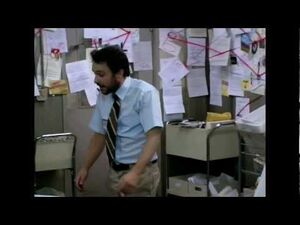 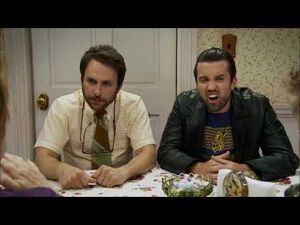 Charlie's Mom Gives Too Much Information 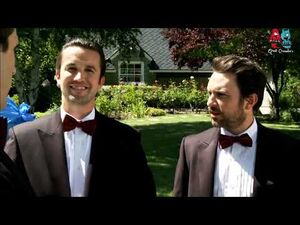 Ronald MacDonald- The Gay One
Community content is available under CC-BY-SA unless otherwise noted.
Advertisement