Carefully planning his revenge on the townspeople of Stone Cove.

To get revenge on the town of Stone Cove for forgetting his suffering and his parents' murders.

Ronald Perkins is a psychopathic man who kidnapped and even corrupted through cult-like methods, fourteen children including deputy officer Dwayne Hopper's son Kyle from their parents in the small American resort town of Stone Cove, Maine, by turning them into strong and zombie-like savage killers that kills for him, and he is the eponymous main antagonist of the 2009 horror/thriller film Perkins' 14.

He was portrayed by Richard Brake.

Ronald Perkins was born in 1962 and his descent into madness began on the night that his parents were viciously killed by intruder at their house when he was only six years old. His mother was stabbed sixteen times and his father was shot in the face. The killer got away and the police in Stone Cove have little luck catching him and eventually gave up the search, ruling the case a probable murder/suicide which to Ronald is completely false. Everybody but him moved on and Ronald himself was all alone with no friends and no family.

37 years later in 1999, Ronald Perkins began kidnapping the fourteen children of fourteen different families one child at a time in a string of local unsolved disappearances that shooked the town and takes them back to the basement of his house where his vendetta goes much further as he conducts insane experiments and administered drugs on them and kept them prisoners in for 10 long years without any further human contact. The last 14th child taken by Perkins was Kyle Hopper, son of deputy sheriff Dwayne Hopper who moved with his family from Boston, Massachuttes to search for a new home and a new life.

10 years later, his suspicions are aroused by a strange 47-year-old prison inmate by the name of Ronald Perkins. Perkins claimed to be a pharmacist and a friend of a local judge, and he suddenly says "think about your daughter" after he explained he has children. Hopper's suspicions begins to grow as he searches and found drugs in Perkins' car without a search warrent at the local police department and searched his file through the database. He discovers the no one at any hospital in Stone Cove has ever heard of Ronald Perkins and that he has no children.

Dwayne searches Perkins’ house and discovers a collection of torture videos featuring the missing victims from the past. In a fit of rage, Dwayne kills Perkins. But things get complicated when a wave of carnage sweeps the town, with reports of Dwayne’s own son amongst the marauding psychopaths that were the same missing children Perkins drugged and reprogammed.

As the 14 children were about to be killed and destroyed by outside authorities that responded to urgent calls for help in the beseiged Stone Cove during the killing sprees, Dwane Hopper at a beseiged police percent after his wife Janine's recent murder there while trying to escape, tied to make Kyle remember as they were running out of time. As he solemnly wrapped his arms around his lost son and hugs him, Kyle too hugs him and snaps his neck. A loving father's attempt was but in vain as Dwayne Hopper was dead and his son Kyle went to the empty jail cells to grab a shotgun and kill the last person that was alone, his own sister, Daisy Hopper.

Ronald Perkins' nightmarish vengeance was complete: his "children" before their deaths in the end, killed every person in Stone Cove including Dwayne Hopper along with his entire family. He has chosen his victims without any prior connections and not based on age or gender or where they are from, but because their families loved them. His very goal of retribution which is now in full circle and achieved, was to make the people of the town suffer for forgetting his suffering, for denying his pain. 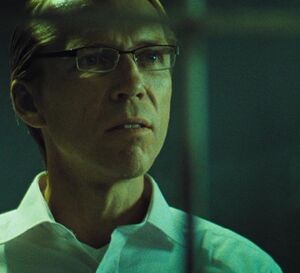 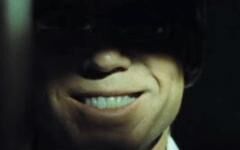 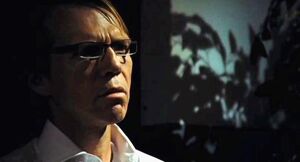 Ronald Perkins is a self-proclaimed pharmacist while hiding his true identity and insidious agenda. 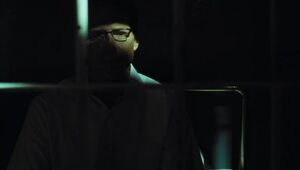 Perkins secretly comtemplates the murder of his parents when he was 6 years old, which serves as his prime motivation for kidnapping 14 children in Stone Cove. 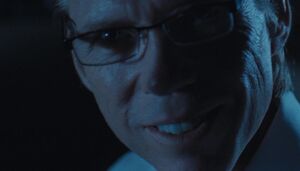 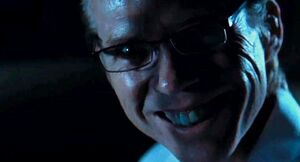 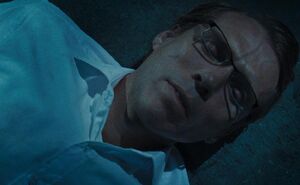 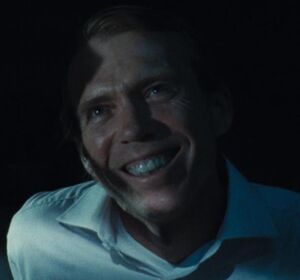 Ronald Perkins had his last laugh before his death. 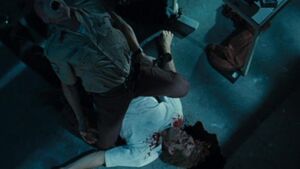 Dwayne Hopper murdered Ronald Perkins out of rage for the kidnapping of his son.
Add a photo to this gallery

Retrieved from "https://villains.fandom.com/wiki/Ronald_Perkins?oldid=4214072"
Community content is available under CC-BY-SA unless otherwise noted.