Find the Orb for Thanos in exchange for the complete eradication of the Xandarians (formerly)
Take the Orb and use it's power for himself to destroy the Guardians, Xandar, Thanos and anyone else who dared to oppose him (all failed).

Ronan the Accuser is the main antagonist of the 2014 Marvel movie Guardians of the Galaxy. He is a powerful Kree Warrior, the commander of The Dark Aster, the boss of Nebula and Korath and a former accomplice of Thanos. This film version of Ronan is far more devious and malevolent than his mainstream comic counterpart.

He was portrayed by Lee Pace who also played King Thranduil from The Hobbit franchise.

A Kree radical, Ronan continues to fight an ancient war between his people and the Xandarians . Ronan has struck a bargain with the Machiavellian Thanos — retrieve the Orb, and in exchange Xandar will finally be eradicated. Ronan leads his army to hunt down the Guardians of the Galaxy when they come between him and his genocidal goal.

Events in the movie

Ronan determined not to miss the opportunity to take revenge on the Xandarians, sent Gamora to retrieve the Orb without knowing that she planned to betray him and Thanos. Later, Ronan is called by the Other because Thanos wants to talk to him. During the meeting the Other passes belittling Ronan, eventually yelling at him for raising his voice in Thanos's presence. Ronan, tired of the Other's insults, kills him with his Universal Weapon, prompting Thanos to turn around and speak to him directly, saying their deal is still in place but he will kill him if he does not bring him the Orb.

Ronan arrives to Xandar in his Dark Aster, when he is about to destroy Xandar the Nova Corps stop him obstructing his vision, while the Ravagers and Rocket protect the civilians and the others decide to confront Ronan, but they are no problem for Ronan who easily wins. When Ronan is prepared to kill, Rocket collides his ship with the Dark Aster causing the destruction of this. When it seemed that they had defeated the Accuser, Ronan appears from the rubble, and starts make fun of them by calling them "Guardians of the Galaxy", but only stops when Star-Lord distracts him with a dance duel, in that Drax destroys the Universal Weapon.

Quill immediately grabs the Orb that almost killed him for his power, but his teammates hold his hands to help him against Ronan, who didn't understand how simple mortals could withstand the power of a Infinity Stone and demanded to know how they could do that; with Quill proclaiming that they true are the "Guardians of the Galaxy". Enraged, Ronan tries to attack again with his hammer, only to find out that it has already been destroyed moments before Quill and his teammates use the power of the Orb to disintegrate Ronan. In his last painful moments, Ronan screams out of in raging pain before his body explodes, killing him and ending his tyranny for good.

Despite his death, Ronan's actions had serious consequences for the entire universe; his betrayal of Thanos led the Mad Titan to embark on a ruthless quest for the stones.

Ronan also appears as a collectable character in the 2013 video game, LEGO Marvel Superheroes and has been released as an official Lego minifigure in the set 76021.

Ronan appears in Disney Infinity: 2.0 Edition, trying to prevent the Guardians from stealing his Infinity Stone. He follows them to Knowhere, but eventually gets defeated by them. He is also available as a playable character for the Guardians of the Galaxy Play Set and Toy Box 2.0.

Ronan was extremely passionate and energetic about his crusade; however, he delusionally believed that his cause, which was the genocide of Xandar and all its living creatures, was righteous. He did not see himself as a fanatic or a terrorist (both of which he was) instead he simply considered himself a follower of ancient Kree laws, and in his mind anyone who refused to follow them was an enemy who deserved execution.

Ronan proudly hated Xandarians, considering their culture and very existence were a disease and he was simply "curing" the universe by eradicating them. He took immense pride in his religion of a Kree, however his species and superiors actually signed a peace treaty with the Xandarians, indicating that he had no respect for anybody who disagreed with his own beliefs. Ronan had no respect towards his allies; he callously sacrificed his own soldiers during the attack on Xandar and showed no concern over Korath's death nor Nebula's abandonment. He even betrayed and threatened Thanos (whom many considered the most powerful being in the universe) after coming into the possession of an Infinity Stone.

Ronan and his allies On Empire Magazine

Ronan and Nebula speaking with Thanos in The Sanctaury

Ronan and Starlord both try to get the Infinity Stone 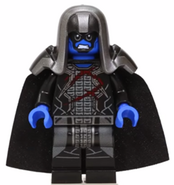 Official LEGO version
Add a photo to this gallery

Retrieved from "https://villains.fandom.com/wiki/Ronan_the_Accuser_(Marvel_Cinematic_Universe)?oldid=1823318"
Community content is available under CC-BY-SA unless otherwise noted.