Dear (by his mother)

Ronno is the secondary antagonist of Disney's 5th full-length animated feature film, Bambi, and the main antagonist of Bambi II. He is another close enemy of Bambi, alongside Man.

As Young Ronno, he was voiced by Anthony Ghannam.

In the first film and book, Ronno appears and tries to get Faline (who he wishes to be his mate) to leave with him against her will, causing Bambi to battle him. Ronno is superior at first but Bambi (despite being the youngest buck) eventually overpowers him and knocks him off a cliff into water below.

Ronno is not seen again after this, leaving it unknown if he survived the wild fire along with some of the other forest animals.

Ronno appears in Bambi II, revealing that Bambi and Faline have actually known him since they were fawns. He has a much larger role this time around and is often seen trying to antagonize and put down Bambi whilst trying to impress Faline. Near the end, however, when some of man's dogs are out and about, Ronno runs away from danger, revealing how much of a coward he really is.

At the film's climax, when he tries to walk in and pick on a now-teenage Bambi, saying that one of these days they will meet again (hinting the fight Ronno and Bambi would do in the first film). But Ronno slips and gets bitten on the nose by a turtle and runs away in fear, crying for his mother. In response, Flower tells the others that he told them turtles were scary.

Two scenes in this film resemble incidents that happened in the first film: Ronno tries to get Faline to leave with him by force when she wants to stay with Bambi and the second incident was he and Bambi fight similar to how they would years later as young adults.

Ronno is shown to be an overconfident, egotistical, and arrogant jerk, who is usually seen bullying Bambi, and trying to steal Faline from him like Bluto trying to steal Olive Oyl from Popeye or Victor Quartermaine trying to steal Lady Tottington from Wallace. He is also very stupid and treacherous to his mother by berating her for bothering when he's trying to make new friends, but runs to her when in danger (e.g. Man's dogs and being bitten on the nose by a turtle). Ronno also had irredeemable qualities at all.

Ronno has dark brown fur, black tipped ears with a hole in his right ear. As a fawn, he has budding antlers and green eyes whilst as a young adult, he has brown eyes and three points on his antlers.

Judging by his appearance, Ronno is at least a few months older than Bambi since as fawns, he has budding antlers and no spots on his fur whilst Bambi had no antlers and still had spots (until the end of Bambi II). As a young adult, Ronno has three points on his antlers whilst Bambi has two.

Ronno fibbing about how he "defeated" Man. 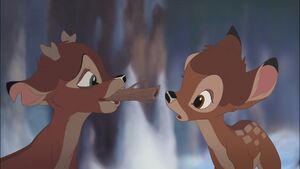 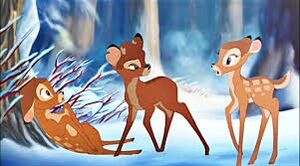 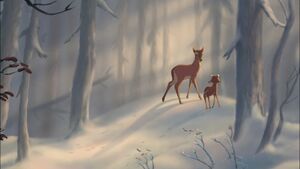 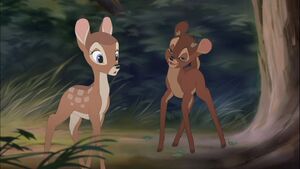 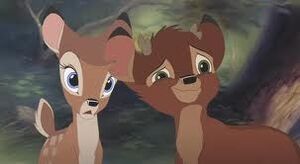 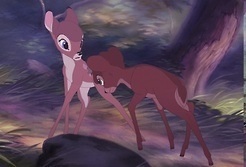 Young Ronno trying to get Faline to leave with him. 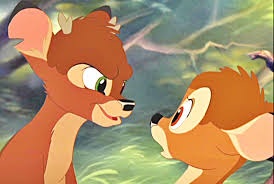 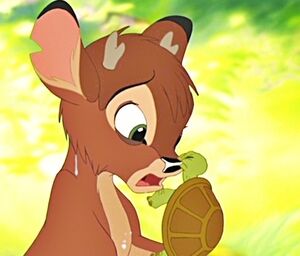 Young Ronno gets bitten by a turtle. 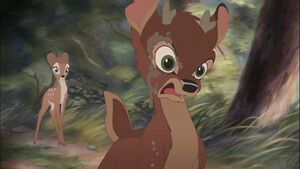 Ronno preparing to chase Bambi and Thumper in anger. 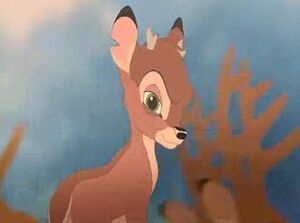 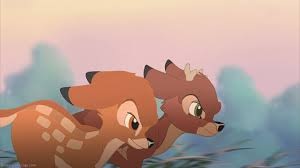 Ronno and Bambi racing with the other Bucks 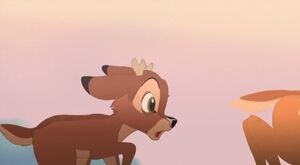 Ronno being overtook by Bambi. 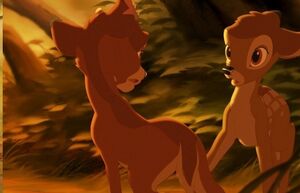 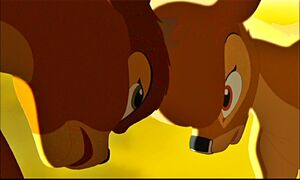 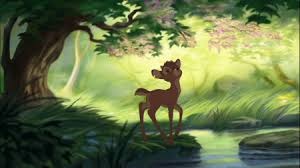 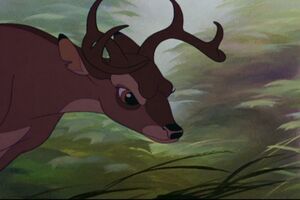 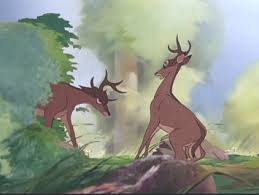 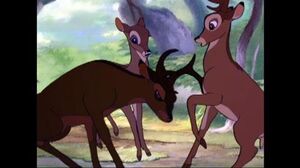 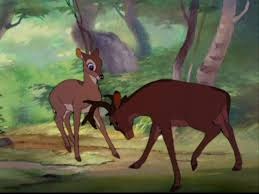 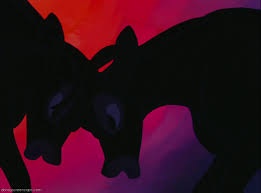 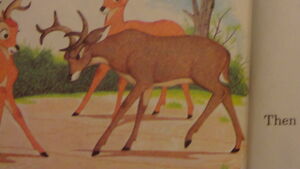 Ronno as he appears in the book Bambi Grows Up. 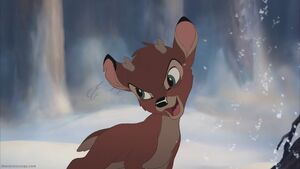 Retrieved from "https://villains.fandom.com/wiki/Ronno?oldid=2392115"
Community content is available under CC-BY-SA unless otherwise noted.