Ronny Boxer was a vicious criminal and a villain in Batman Beyond.

Ronny Boxer operated illegal dog fighting rings. He has been that way since he worked with dogs for most of his life, and organized dog fights from backrooms of shady joints, abandoned warehouses and barges in the docks of Gotham. He was arrested a couple of times, but got out easily. After Batman shut down his operations for good, it seems Boxer's criminal career was finished.

He was the one who once kidnapped Bruce's dog, Ace, for use in highly illegal dog fights until a police raid managed to free Ace and temporary put Ronny out of business.

However Ronny would return later as the new Batman tracked the criminal down and finds out that he is back to his old tricks, only now he is using mutagenic drugs to turn dogs into literal killing machines. 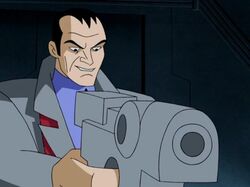