Rook Kast is the main female villain protagonist of the Darth Maul: Son of Dathomir comic book series. She was a human female born on the planet of Mandalore and was a member of the Shadow Collective during the late stages of the Clone Wars. As a field commander of the Mandalorian Super Commandos, Kast was an officer of the criminal syndicate and helped preserve Darth Maul's position as Mandalore's authoritarian ruler.

Rook Kast was a human female born on the Outer Rim world of Mandalore sometime during the final years of the Galactic Republic. During the Clone Wars, she joined the Shadow Collective and became a member of the Mandalorian Super Commandos, Mandalorian warriors loyal to Darth Maul and foot soldiers of his criminal syndicate. It's unknown when she joined the group, but most likely joined sometime in 20-19 BBY and eventually became a field commander alongside Gar Saxon of the Shadow Collective's commandos.

In 19 BBY, Darth Maul was captured by Darth Sidious and was held prisoner on Stygeon Prime in the Spire, a prison on the planet occupied and used by the Confederacy of Independent Systems. Sidious had Maul captured and was interrogated by both him and Maul's successor, Count Dooku, for the location of his other forces, a demand Maul refused to comply. Almec, who was the Prime Minister and public leader of Mandalore, ordered Rook Kast and Saxon to travel to Stygeon Prime and rescue Maul so he could lead his forces once more and the two dispatched for the Spire.

After locating the prison, Kast and Saxon took out two commando droids and broke into the base and made it to is third level before reporting their progress to Almec. The two mandalorians headed for Maul's cell, but not before dealing with several B2 Super Battle Droids and Droidekas via their rockets and droid poppers and managed to free Maul. Once the renegade Sith Lord was rescued, Kast and Saxon helped Maul escape and lead him to their  Gauntlet Fighter where they departed for the Shadow Collective's base on Zanbar, unaware that the Separatists were tracking them.

After rescuing Darth Maul, Rook Kast and the others headed for Zanbar where soldiers of the Shadow Collective awaited Maul's arrival. Not long after their arrival however, a large contingent of the Separatist Droid Army under the command of Supreme Commander General Grievous had arrived and landed to destroy the Shadow Collective and their base. Kast participated in the ensuing battle where both Maul engaged Grievous in a duel and both sides sustained heavy casualties, but Maul's forces were being overrun and was forced to retreat. Rook Kast was present on the Gauntlet Fighter, the Nightbrother, and helped Maul retreat and bombed the area while the surviving Shadow Collective forces fled to Ord Mantell, a world under the control of the Black Sun.

After their costly defeat on Zanbar, the Shadow Collective retreated to Ord Mantell with Kast on Maul's ship while the Sith contacted Mother Talzin for guidence. After arriving on Ord Mantell City, Kast was present at a meeting where Maul detailed how his forces will hold off the incoming Separatist invasion of their homeworld and received reinforcements in the form of Nightbrothers sent by Talzin from Dathomir. Once the Separatists arrived, Kast piloted the Nightbrother and spearheaded a surprise ambush on the Separatist fleet while Saxon and the others were barely holding off the Separarist forces on the ground. In the ensuing ambush, Maul stormed Grievous' command ship and stormed into the bridge where he forced the general to deactivate the droid forces. He complied and spared Maul's forces from being annihilated and Kast took Grievous into custody.

After their victory at Ord Mantell, the Shadow Collective withdrew to Vizsla Keep 09, a Mandalorian supply outpost, where Kast and Saxon guarded Grievous and Dooku once they became prisoners of war. Maul contacted Sidious to show how he'd undermined his planes, but had Kast take Grievous away to a cell while Dooku stayed behind so Maul could convince him to abandon Sidious. Eventually, the Republic found out where Maul was at and sent a task force to assault the compound, an attack that Kast reported to Maul once the third hangar was attacked. In the ensuing battle, Dooku and Maul formed a brief alliance and duled the Jedi Knights accompanying the clones, Obi-Wan Kenobi, Master Tiplee, Mace Windu and Aayla Secura. Tiplee was killed by Dooku and Windu and Secure knocked unconscious while Kast fired her rocket to cover the retreat of Maul and any forces that avoided being killed or captured.

After escaping Vizsla Keep 09, Maul began to face dissent from within his own ranks with Ziton Moj and Fife demanding where the profits they were promised were at, but Maul assured them they'd get it. After Maul knew that Dooku wouldn't abandon Sidious, he had Kast point a blaster at his head and lead the Dark Lord of the Sith at gunpoint to Talzin's lair on Dathomir. After Talzin possessed Dooku, Kast left and remained on the Nightbrother where she was informed that the Separatists had arrived and were assaulting Shadow Collective holdings. Moj and Fife reported that they were under attack and demanded to see Maul, but couldn't as he was dueling Sidious and Grievous who returned to finish off Maul's Shadow Collective. With Maul not present and their holdings under attack, the Pykes and Black Sun announced that they were leaving the Shadow Collective and were abandoning Maul. Kast ordered them to hold their posts and threatened to kill them for deserting, but they were unfazed and left her.

Kast was then informed by a Mandalorian commando that a Separatist fleet had arrived and was landing ground troops on Dathomir's surface and Maul was in danger. Kast and Saxon piloted the Nightbrother to Maul's position and demanded that he get onboard. When he didn't comply, Talzin force pushed Maul to them and the two Mandalorians dragged Maul onto the ship even as Maul demanded to be let go and Talzin was killed. Eventually, the three of them escaped, but the collective was destroyed and the Nightbrother's massacred by the Separatist Droid Army. Rook Kast's fate is left unknown, but she was most likely captured or killed during the Siege of Mandalore in 19 BBY at the end of the Clone Wars.

Rook Kast was a Mandalorian warrior and supported her people's militaristic and warrior past. When Maul took over, she swore allegience towars him and alligned herself with the Shadow Collective despite Maul's non-Mandalorian heritage and the renegade Sith having killed his predecessor, Pre Vizsla. Throughout Maul's campaigns, Kast was one of his loyal soldiers rescuing him from Stygeon Prime to aiding him in his fight against the Separatists and the Republic. She opposed any dissent within the organization's ranks and was willing to kill anyone who disobeyed or opposed Maul's leadership.

Rook Kast on the cover of the first issue of Son of Dathomir.

Rook Kast breaking Maul out of prison in the Spire. 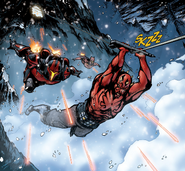 Kast firing her rocket at the Jedi Forces on Vizsla Keep 09.

Rook Kast talking to Moj and Fife.
Add a photo to this gallery

Retrieved from "https://villains.fandom.com/wiki/Rook_Kast?oldid=3053476"
Community content is available under CC-BY-SA unless otherwise noted.