Leader of the Mars People

Save the Mars People from getting devoured by the Invaders (Metal Slug 6).

Mastermind
Rootmars is the tyrannical leader of the Mars People, an alien race seeking to conquer our world, and the main antagonist in Metal Slug 3. He also appears as a controllable vehicle in Metal Slug 6.

The Rebel Army, led by Donald Morden, made contact with him and the Mars People and made a deal with them. Rootmars backed them up with their technology and resources to help them take over the world. However Rootmars was only using the rebels to start wars so all of Earth's military forces would be weakened from the excessive battles, making it easier for the Martians to fight any opposition.

Morden was later abducted by the Martians and held in their mothership, so the Rebels make a temporary allegiance with the Regular Army soldiers to fight the Martians. Their mothership is severely damaged, forcing them to retreat temporarily. Rootmars immediately took the next step, abducting General Morden and sending a Martian disguised as him to lead the rebels and start a new coup d'etat, causing numerous supernatural phenomena throughout the world.

As the Martians were unmasked, they kidnapped one of the Regular Army members and immediately made their escape, but they were followed by the rebels and the Regular Army. Their ship Rugname was invaded and Rootmars, who was controlling the ship using his brainpower, was put out of commission, thus triggering the self destruction of the ship.

As the heroes made their escape from the exploding ship, Rootmars made a last attempt to kill them, but was ultimately defeated and sank to the bottom of the sea.

With Rootmars gone, the Invaders used the opportunity to attack both the Mars People and Earth. However, with assistance from the Rebel Army, the Martians were able to recover Rootmars from the bottom of the sea. The Mars People and the Rebel Army later incorporated the Regular Army into their alliance to destroy the Invaders. If the player rides Rootmars in the 4th mission, then he will appear to rescue the players at the end of the final mission.

Rootmars reappeared in Metal Slug 6 along with Mars People, they were attacked and preyed by the Invaders. Therefore, it stroke a temporary alliance with the heroes, allowing himself to be controlled as a vehicle in Stage 4, and eventually became one of the two possible being who saved the heroes from a bottomless pit besides Morden, if the hero chose to ride Rootmars. 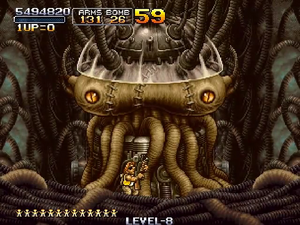 Concept artwork of Rootmars' first form.
Add a photo to this gallery

Retrieved from "https://villains.fandom.com/wiki/Rootmars?oldid=4142641"
Community content is available under CC-BY-SA unless otherwise noted.