The Mad Dog of Saltpans

Sellsword of the Brave Companions (formerly)

Cause as much destruction and suffering across Westeros as he can (succeeded).

Leave Westeros across the Narrow Sea with his band (failed).

Rorge is a major antagonist in A Song of Ice and Fire and a minor antagonist in its TV adaptation Game of Thrones. He is a dangerous criminal and a sadistic rapist along with Biter, forcibly recruited into the Night's Watch by Yoren during his visit to King's Landing. He served as the main antagonist of Riverlands POV in A Feast for Crows.

In the TV series he was portrayed by Andy Beckwith, who also played Clanker in the Pirates of the Caribbean film series.

Rorge is one of three known criminals imprisoned in the black cells. He is taken from the black cells and is bound for the Wall in Yoren's band alongside Arya Stark, Gendry, Hot Pie, Lommy Greenhands, Jaqen H'ghar, and Biter, among others. Yoren considers him so dangerous that he keeps him chained in a wagon, along with Jaqen H'ghar and Biter, for the journey to the Wall.

When Yoren's band is attacked at the Gods Eye by Ser Amory Lorch and Yoren is killed, Arya saves Rorge's life, along with Biter and Jaqen H'ghar, by giving them an axe to break free with as the room burns around their wagon. The three join the Brave Companions for a time, under Vargo Hoat. They help Arya free the northmen held captive at Harrenhal, though Rorge and Biter do it reluctantly and only because Jaqen requested their help.

Rorge is part of the Bloody Mummers (Brave Companions), a foraging company led by Vargo Hoat  who captures Jaime Lannister and Brienne of Tarth near Maidenpool. He immediately threatens Brienne with rape and severely beats Jaime into submission. He later claims the bloodstained surcoat off the corpse of Cleos Frey.

On the way back to Harrenhal, Rorge, Shagwell and Zollo attempt to rape Brienne. He argues with Zollo over who would rape Brienne first, but Jaime thwarts them. Jaime considers Rorge one of the three worst members of the Brave Companions.

Rorge is one of the many Brave Companions who remain behind at Harrenhal after several failed foraging runs. He is present when Brienne of Tarth is thrown into the bear pit and threatens Jaime once more when he comes back to save her, but Vargo Hoat orders him to stand down.

After Hoat's death, Rorge, Biter, and some of the remaining Brave Companions travel east to the town of Saltpans where Rorge finds and dons the Hound's helm once worn by Sandor Clegane. Rorge and his companions wanted to find a galley or a cog that can bring them across the narrow sea. However, Saltpans is not an important port and no ship is available at the time. The outlaws turn their outrage against the townfolk and begin raiding Saltpans, burning all buildings and slaughtering the people they came across.

The old knight of Saltpans, Ser Quincy Cox, is too worried for his family's safety refuses to let the helpless smallfolk in his keep. The outlaws rape and mutilate, and target violence against all, including old Septon Bennet and children in the arms of their mothers. When they finished their work, the outlaws headed west again, with Rorge reportedly laughing loud about his men's deeds. The atrocities are watched by a few helpless fishermen from the town, who were on their boats. After the outlaws leave and the fires had burned down, they went ashore, but all that is left for them is to bury family members and neighbors. They gathered the few survivors and brought them to the Quiet Isle, where the Elder Brother takes care of them.

Witnesses describe Rorge wearing the Hound's helmet and roaring savagely as he led the monstrosities. Biter crushed his victims with his weight and, as he often does, tore flesh out of them with his sharpened teeth. A witness states a woman had been raped a dozen times, before she was given to Biter, who ripped her breasts apart with his teeth. Still, her curses while she lay dying on the Quiet Isle were reserved for Ser Quincy for keeping the gates to his holdfast closed.

Another survivor is Brother Clement, a member of the order who had gone to Saltpans to sell the renowned mead brewed on the Quiet Isle. Rorge had his tongue ripped out when he refused to break his vow of silence, declaring that Clement had apparently no need of it anyway. Clement also eventually dies of the wounds. Some other brothers from the Quiet Isle are wounded or otherwise traumatized as well. Rorge raped a 12 year-old girl promised to the Faith, crushing the girl's flesh with his armor as he lay on her, then had given her to his men who cut her nose and nipples off. The girl survived to tell her story, as did some boys who had managed to hide in time.

Rorge wore Sandor Clegane's helm whilst brutally sacking Saltpans, which results in Clegane being blamed for the attack. Later Randyll Tarly makes up a rumor that the Hound has joined the Brotherhood Without Banners and blames the outlaws along with Sandor for the Raid on Saltpans.

At the inn at the crossroads, Rorge duels with and is slain by Brienne of Tarth.The fishermen and others who escaped the assault eventually abandon the town, with most of them going to Maidenpool, leaving nothing behind in Saltpans than the holdfast. When Arya Stark arrives at Saltpans she finds the place destroyed, but manages to find a boat for Braavos, with the captain Ternesio Terys and his family.

At the inn at the crossroads, Rorge duels with and is slain by Brienne of Tarth, while Gendry saves her from Biter. Lem Lemoncloak takes the Hound's helmet from Rorge's body. 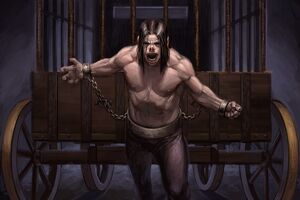 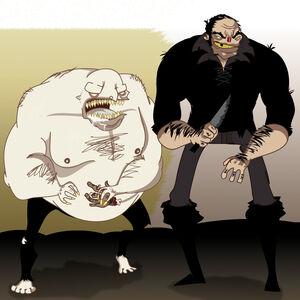 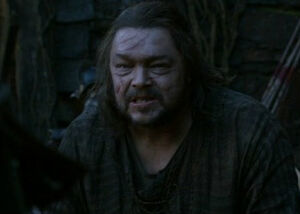