Kill James Bond once and for all and then to get revenge upon MI6 for the death of Dr. Julius No (failed)

Colonel Rosa Klebb is one of the two main antagonists in the novel and James Bond film From Russia with Love (alongside Kronsteen). She is a representative for both SMERSH and SPECTRE, serving as Number 3 for the latter organization whilst covering her identity as a Russian agent. She was the first female to serve as a main villain in any James Bond media, and only one of two in the film series so far (the other female main villain being Elektra King).

She was portrayed by the late Lotte Lenya.

Colonel Klebb is a high ranking member of the feared Russian counter-intelligence agency SMERSH, where she serves as the supervisor of Department II (operations and executions). She has a reputation for overseeing the interrogations of enemy agents in which, after exacting various methods of torture on the target, she speaks to them in a warm and motherly tone in an unusual and apparently effective method of extracting necessary information. Klebb is assigned to spearhead an operation to get revenge on James Bond for his involvement in the deaths of two other SMERSH operatives. Teaming with Kronsteen and Red Grant, Klebb sets a trap for Bond, enlisting a cipher clerk, Tatiana Romanova, to pretend to defect, claiming to fall in love with Bond. When Bond takes the bait, Grant will kill him. This plan backfires, however, when Tatiana really does fall in love with Bond. After Grant is killed, Klebb must attend to Bond herself.

She tracks him and Tatiana to Paris and he encounters her in a hotel room, dressed as a wealthy widow. After failing to kill him with a gun hidden in a telephone, she successfully poisons him by means of a venom tipped dart hidden in her shoe; she is then captured by Bond's friend Rene Mathis, of the Deuxième Bureau. The novel ends as Bond collapses to the floor; Fleming had ended the story as such in case he decided not to write another, ending the series with Bond's death. In the next novel, Dr. No, M reveals that Bond survived due to Mathis' timely intervention, and that Klebb had subsequently died, though the manner of her death is not mentioned.

Klebb is a former SMERSH agent who has defected to become a member of SPECTRE (Blofeld refers to her as "No. 3"). She uses Kronsteen's plans to obtain the Lektor device and kill Bond. She hires Tatiania Romanova to help Bond steal the Lektor, and then sends Red Grant to kill Bond and recover it. When Red Grant dies at the hand of Bond, Blofeld calls both Kronsteen and Klebb to him and wants to know who is responsible for the failure. Eventually, Kronsteen is executed and Klebb is granted one last attempt to get Bond and the Lektor.

Posing as a maid, she enters Bond's suite and attempts to take the Lektor; when she is caught she points a gun at Bond. Tatiana Romanova then distracts her, causing her to drop the gun, and Bond and Klebb fight. As in the novel, Klebb attempts to kick Bond with the poison tipped shoe blade, but Bond blocks the attack with a chair. Tatiana then picks up Bond's gun and shoots Klebb in the chest, killing her. 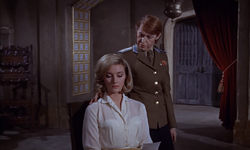 Klebb briefs Tatiana about her mission 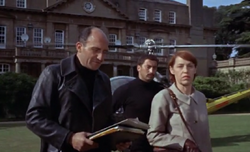 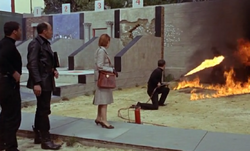 Klebb at the training facility for SPECTRE recruits 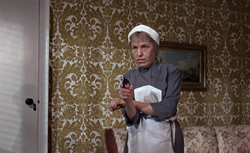 Klebb attempts to steal the Lektor herself 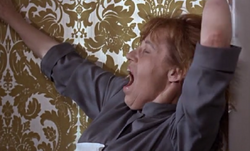 Klebb is shot by Tatiana (Bond: She's had her kicks...)