Start a Wiki
Rosa Mendes is a WWE Diva who has spent nearly her entire tenure as a villainess.

Rosa made her main roster debut on the day after Survivor Series in 2008 as an audience member who was an obsessed fan of Beth Phoenix. Her obsession eventually reached a point where she jumped from the crowd and attacked Melina to "protect" her. Rosa eventually became an in-ring Diva and mainly served as Beth's protégé/tag team partner in several matches. In 2009, Rosa was moved to the ECW brand, where she served as the girlfriend/valet for Zack Ryder.

Rosa's first stint as a villainess ended in 2010, when she was the subject of taunts by LayCool. In 2011, Rosa would become a villainess again and align with Alicia Fox and Tamina Snuka for months as they feuded with Natalya, AJ Lee, and Kaitlyn . Rosa later became a manager for Primo and Epico Colon, who became WWE Tag Team Champions with her in their corner. During her role as a manager, the evil Rosa also engaged in feuds with Divas such as Natalya, Naomi, and Cameron. She continues to feud with the aforementioned Divas, along with the rest of the cast of Total Divas.

Rosa's villainous traits include being prone to anger (sometimes to the point where she speaks Spanish) and her vengeful demeanor. 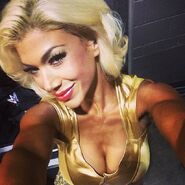 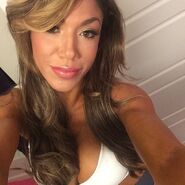 The evil Rosa seductively kissing Paige on Total Divas
Add a photo to this gallery
Retrieved from "https://villains.fandom.com/wiki/Rosa_Mendes?oldid=3503282"
Community content is available under CC-BY-SA unless otherwise noted.