De facto leader of the Cutthroats

Rose is an antagonist in Fallout 76. She is a reprogrammed Miss Nanny robot that serves as the de facto leader of the Appalachia Raiders.

She is voiced by Alex Cazares.

Some time after losing his girlfriend Rosalyn Jeffries when he unintentionally drowned her in the Christmas Flood he unleashed upon Charleston against The Responders for presumably killing her after capturing her as a means to get him to back off and leave the Responders alone, Cutthroats Raider leader and overall Raider warlord David Thorpe built Rose as a way to still remember Rosalyn, right up until the Scorchbeasts led to many Raiders fleeing Appalachia, while Thorpe himself was turned into a Scorched with many others as a result of the Scorched Plague.

All alone at the Top of the World with only the corpse of Hank Madigan to keep her company, Rose later met the Vault 76 Overseer, but refused to help her with her mission from Vault-Tec unless the Overseer was willing to help Rose. Annoyed by Rose's behavior, the Overseer ignored her and continued on her journey. When the Vault 76 Residents show up at the Top of the World later while looking for the uplink that Madigan had, Rose asks for their help to provide a way for her to broadcast her voice all over Appalachia by putting together a signal booster and taking it to the National Isolated Radio Array to install in one of the smaller satellite dishes there and transferring power to said auxiliary dish to allow Rose to essentially tap into Appalachia's Emergency Broadcast System so her voice could be heard all over the region. As thanks, she invites them back to the Top of the World, shows them Madigan's corpse, and offers to help them if they help her. Chief among her requests are learning about the five Raider gangs and their various tactics they used, before then asking to recover the key fragments each Raider leader possessed that leads to a cache in the basement of the remains of the Pleasant Valley Ski Resort, where the uplink Madigan was looking for was kept alongside other weapons, ammo, and more. With that done, Rose now considers the Vault 76 Residents her friends, thanking them for their help. She later learns of needing to upload a holotape from the Free States to aid with their Scorched Detection System that the uplink Madigan needed was part of, and she agrees to help with that.

Later, upon learning that the New Appalachia Raiders have returned to Appalachia, Rose is ecstatic that her plan worked, but learns that the Vault 76 Residents, under orders from the Overseer, need to make contact with the Raiders and get them inoculated with the Scorched Plague vaccine. To do so, Rose has them first look for a trophy that Thorpe owned that symbolized his power as the overall Raider warlord. After that, she needs a holotape recovered from a shrine Thorpe set up to Rosalyn that carries some of Rose's memory in it that included many of Rosalyn's memories that Thorpe preserved after her death. From there, Rose has them take the holotape to be fixed at a secret listening outpost at Solomon's Pond, before returning it to her. After unlocking those parts of her memory banks that Thorpe had sealed off for his own reasons, she then sends them to Arktos Pharma to recover one last holotape that Thorpe used the word "negotiate" in conversation with while he worked there as he never used the word during his time as a Raider warlord. Once the holotape is recovered, Rose sends them to a nearby relay tower to upload the finalized holotape to contact Meg Groberg, the leader of the New Appalachia Raiders. Rose knew that if Meg heard Thorpe's voice, she would come running to avoid being punished by him for running away when the Scorched and Scorchbeasts overran the original Raiders. Once the holotape is uploaded, Rose asks the Vault 76 Residents to return to the Top of the World and clear out the second floor mezzanine/shopping center of Scorched so they could speak with Meg there. Once it is done, Meg arrives with two Raider bodyguards, and after speaking with the residents, agrees to have the Raiders inoculated against the Scorched Plague, making the Vault 76 Residents uneasy allies of the New Appalachia Raiders until they do enough work to become good friends with the Raiders. Rose meanwhile stays at the Top of the World, believing that, as a member of the old guard so to speak, she wants to sit back and see how Meg and her Raiders handle things from here on out. 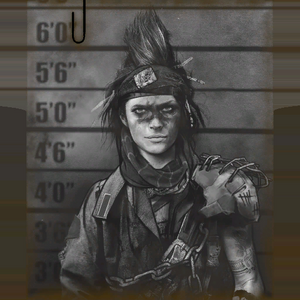 Rosalynn Jeffries, the person whom Rose was based on 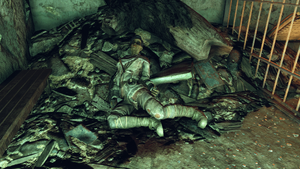 Rosalynn's corpse in the Charleston Courthouse