The Woman in the Hat
Irish Rose

Leader of the True Knot

Feeding off other telepaths' "Steam".

Maintain immortality by feeding off of other telepaths' "Steam" which allows them to "Shine".

Rose the Hat (real name: Rose O'Hara) is the main antagonist of Stephen King's 2013 novel Doctor Sleep, and its 2019 film adaptation of the same name. She is the semi-immortal leader of a nomadic tribe of quasi-demonic murderers known as the "True Knot" and Danny Torrance's arch-nemesis. Rose and her followers are known to seek out children with telepathic abilities and tortures them to death, feeding off their psychic essence, which they call "Steam". By feeding off of this, they are able to functionally live forever.

In the 2019 film adaptation, she was portrayed by Rebecca Ferguson, who also played Morgana in The Kid Who Would Be King and Riza Stavros in Men In Black: International.

Little is known about Rose's past, except that she was born in County Antrim, Ireland, as Rose O'Hara. At one point, she emigrated to the United States. At the time she became a member of the True Knot, she was living on the western frontier, and was known as "Irish Rose". Her exact age is unknown, but she has been a member of the True Knot since at least the mid-19th century.

She acts as the leader of the group as she has the most powerful telepathic abilities. These enable her to locate children with psychic abilities, referred to by the collective clairvoyant term the "Shining", in order to feed off of their "Steam", or psychic energy. In particular, she is attracted by the Shining of a 12-year-old girl named Abra Stone who has extremely powerful abilities. She orders the True Knot to kidnap her, unaware that Abra is being protected by an adult Danny Torrance, who is still recovering from the traumatic events of the Overlook Hotel that doomed his late father's soul.

After two kidnapping attempts, which Abra and Dan successfully foil, Abra convinces Rose to meet her at the location of the former Overlook Hotel for a final battle. Dan arrives at the location, while Abra assists him via psychic projection. After a long struggle which results in the deaths of all of the members of the True Knot, Danny pushes Rose off of an observation platform, causing her to fall to the ground break her neck, killing and ending her reign, this time, for good.

Rose's role in the plot is same as in the book, with a few notable differences. Her death is changed as she dies from being attacked by the ghosts of the Overlook Hotel.

Rose is extremely cold, calculating, and uncaring. She has nothing but contempt for humans, whom she and the rest of the True Knot refer to as "Rubes". She is a cold-hearted killer who demonstrates no remorse when she tortures several young children to death. She is also highly intelligent, able to conceive and execute complex plans with ease. Her powerful telepathic abilities make it easy for her to track her prey's next move, and thus to capture them more easily. Rose is shown to be extremely obsessive, becoming irrationally fixated on finding and killing Abra Stone when she realizes how powerful Abra is; this obsession turns from fascination to rage once Abra continues to defy her.

Rose had a relationship with Crow Daddy, her second-in command.

She is described by multiple characters as being the most beautiful woman that they have ever seen. However, when she is in need of steam, she opens her mouth unnaturally wide, revealing a single, discolored tooth resembling a walrus's tusk.

She constantly wears a battered silk top-hat, which is the source of her nickname. The origins of the hat are never explained. She has a very strong connection to it, to the point of flying into a violent rage if it is ever knocked off of her head. 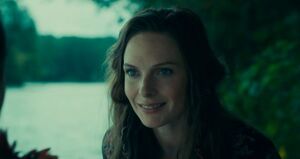 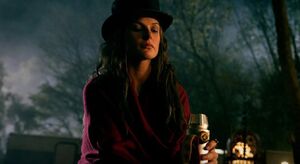 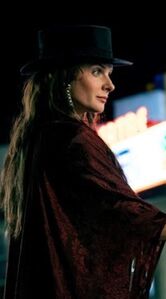 Retrieved from "https://villains.fandom.com/wiki/Rose_the_Hat?oldid=3411702"
Community content is available under CC-BY-SA unless otherwise noted.