Conquer the arctic wilderness and kill all the wolves so he can build a resort (failed).

Rosie Little is the main antagonist of Disney's 1983 live action film Never Cry Wolf. He is a crazed bush pilot who wants to kill all the wolves in the Arctic region and is Tyler's former best friend.

He was portrayed by the late Brian Dennehy.

Tyler is assigned by his government to the Lupine Project to determine whether wolves are responsible for the depletion of the caribou population in the Arctic region. He arrives at a small town in the Yukon Territory and hires Rosie to fly him 300 miles into the wilderness.

Many of Tyler's supplies are left behind because they weigh down the aircraft, although the biologist manages to sneak aboard 24 cases of beer. The harrowing flight concludes with Tyler standing alone on the frozen landscape as Rosie's plane disappears in the distance.

As Tyler watches Ootek disappear in the distance, Tyler follows the sound of gunshots to an encampment, where Rosie and two companions roast caribou meat over a fire. Rosie is so glad to see Tyler, whom he expected to have died in the wilderness.

He tells the biologist of his plans to build a resort around a nearby hot spring, then offers to fly Tyler back to civilization. Noticing that the airplane is loaded with wolf pelts, Tyler refuses. Rosie is indifferent to Tyler's outrage and promises to come back for him in the next few days. Three days later, Tyler returns to his campsite and finds George and Angeline's cubs alone in the den. Rosie's plane flies overhead and Tyler fires his rifle to dissuade the pilot.

As Rosie flies away, Tyler hears a radio playing in a nearby shack and discovers Mike inside, preparing to travel north for the winter. When Tyler asks about the missing wolves, Mike advises him to worry about his own survival, explaining that the slaughter of George and Angeline are a sad reality. Tyler realized that it was Mike who killed George and Angeline and Mike smiles as he invokes the phrase "survival of the fittest", displaying a new set of false teeth. 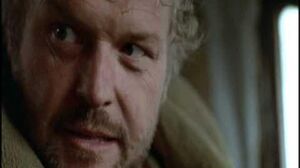 Never Cry Wolf - Adventure.mpg
Add a photo to this gallery

Retrieved from "https://villains.fandom.com/wiki/Rosie_Little?oldid=3804853"
Community content is available under CC-BY-SA unless otherwise noted.