Queen of the "Elves"

Ruling over her elves.

Take children away from the world of evil adults.

Convert children into elves and turn Misty Valley into their paradise free of adults.
Convert the worthy few adults into Pseudo Apostles to guard them.
Kill Guts.

Rosine (in Japanese: ロシーヌ, Roshīnu) is a minor antagonist in the manga and anime Berserk, being a young girl turned Apostle and the main antagonist of the Conviction arc.

Formerly a tomboyish and adventurous soul, Rosine's cruel actions and behavior stem from her tragic upbringing. She also believes herself to be a elf, mostly from seeing similarities to herself to the story of Peekaf. Due to her childlike personality, she doesn't fully comprehend the results of her actions, and has the misguided morality that among a group of adults, she is the only one correct and all Apostles are the same. However, she still cares for her friend Jill greatly.

Born in the same village as Jill, Rosine was the daughter between her mother after a invasion caused some of the town's women (Including her) to be abducted and sexually abused by a enemy army. This caused Rosine's father to question if her daugher was truly his daughter or the result of a soldier's degeneracy, causing the man to fight with his wife over the matter. Ignoring the fighting, Rosine spent her days in the forests collecting small animals and stray items. She eventually met Jill, telling her that she is a elf herself even with knowledge of them being pure fiction. She ran away from home later that night, planning to head into the supposed elven paradise in the Misty Valley. Giving her friend all her belongs but a stone later revealed to be Behelit, she headed to the valley. Once the search parties found her, her furious father struck her for his attempt before attacking her intervening mother. With said behavior outlawed in her "paradise", she activated the stone, sacrificed her parents, and was reborn into a Apostle. Even since, her actions were mostly limited to kidnapping children to transform them into other "elves" and turning unlucky and lost adults in the forest into her personal guard.

The night before the Eclipse, Rosine, along with other Apostles, slayed the wounded and rear end of the Band of the Falcon's forces, with Rickert seeing a glimpse of her before. Rosine also planned to devour the young men, but Skull Knight saved the hero, although not without Rickert developing a fear of elves due to this incident.

Two years after this, Rosine was attacking her former home when she found Guts trapping some of her goons inside a barn before setting it alight. Spraying her toxic dust at him, Rosine tried to kill Puck (Thinking him as Peekaf), before stopping her assault when Jill called out to her.

Guts, Puck, Jill set out to the Misty Valley to fight the faux fae. Rosine attempted to convince her friend to join her in being a apostle, but declines out of disgust due to the bloodthirsty ways of her subjects. Rosine fights Guts after destroying her cocoons and saving Jill from a forced transformation, in which she loses the fight with grave injuries. Begging for her family's forgiveness for what she did, Jill directly confronts Rosine, who reveals her disbelief of elves. Despite this, Puck introduces himself to her, and as Guts is held back from delivering the final blow by the Holy Iron Chain Knights, Rosine flies up into the sky once last time to "return to her parents", before collapsing to the ground below, dead. Skull Knight later takes Rosine's Behelit after her demise. 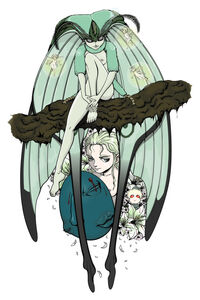 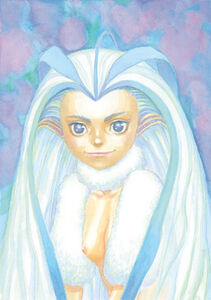