Texas Chainsaw Massacre: The Next Generation

High-ranking member of the Order of the Illuminati

Manipulating Vilmer, the Sawyer family and the enemies of the Illuminati

Ensure the Illuminati have world domination and evaluate the meaning of fear.

Rothman, also called "Agent Rothman", is an enigmatic high-ranking member of the Order of the Illuminati and the overarching antagonist of Texas Chainsaw Massacre: The Next Generation.

He was portrayed by James Gale.

Very little is known about Agent Rothman; he only appears in the Texas Chainsaw Massacre: The Next Generation and is never mentioned in any of the other movies. He is first seen when he enters the Sawyer family house and he tells Vilmer Slaughter to "show the true meaning of horror", he also displays predatory behaviour towards Jenny, licking her face, these facts could suggest that Rothman is in fact Vilmer's boss, and that although he seems deranged, he seems to show a slight amount of remorse for Jenny, at one point, implying that Vilmer was doing the wrong thing by capturing Jenny.

He is next seen when Jenny is being chased by Leatherface and Vilmer. He arrives on the scene in his limousine unbeknownst to Jenny. When she gets into the car, Rothman tells her to relax, that there is nothing to fear. He apologies for his earlier actions, though Jenny understandably does not believe him and says "f--k you". Despite this, it seems that Agent Rothman dropped Jenny off at a police station, then, he is never seen or heard from again.

He wears much more upper class clothes, and has strong elocution. 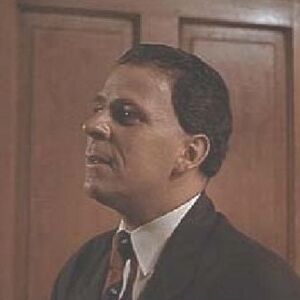 Agent Rothman
Add a photo to this gallery

Retrieved from "https://villains.fandom.com/wiki/Rothman?oldid=3735041"
Community content is available under CC-BY-SA unless otherwise noted.