Assist Dick Dastardly in acquiring the three skulls of Cerberus so the gates to the Underworld are opened (succeeded, later abandoned).

Redeemed Minions
The Rotten Robots are major antagonists in the 2020 Warner Bros. animated film Scoob!. They are the primary minions of the supervillain Dick Dastardly and are replacements for Muttley whom was lost in the Underworld.

They were all voiced by Vanara Taing.

The Rottens are small robots resembling infants with fins on their heads, purple round eyes, and short arms and legs. When attacking or flying, they transform into scorpion-like droids with sharp teeth.

The Rottens were sent by Dick Dastardly to capture Scooby Doo and Shaggy in a bowling alley and they chase the duo down into a back alley until Shaggy and Scooby were beamed up into the Falcon Fury, the ship of the Blue Falcon.

Sometime later, the robot horde later retreated and returned to their master, who tracked the Falcon Fury with his own airship the Mean Machine. Having the Rottens pilot the ship, Dastardly commanded them to attack and give chase, although this failed as Dee Dee Skyes used the beam that was used on Scooby and Shaggy to push the Mean Machine away despite the ship using harpoons to latch on the Falcon Fury.

Inside of the Mean Machine, the Rottens were chastised by Dick for their failure to capture Scooby and are told that they are not nearly as good as his last sidekick Muttley, who is alluded to have more competence than the robots. One of the Rottens, Dusty, apologizes for their failure, but that only upsets Dastardly more. He calls him a "suck-up," and, to prove a point to the other Rottens, he removes his head and replaces it with the top of a vacuum cleaner.

They later attacked Scooby, Shaggy, and the Falcon Fury crew in an abandoned amusement park in Romania, as a group of Rottens cornered the former two in a building; this allowed Dick Dastardly to shoot Shaggy out of the building and pursuit Scooby. Dastardly later called upon another group to carry a bumper car he's in to go after Scooby, who is joined by Dynomutt and Shaggy and Blue Falcon, only for him and the Rotten robots to fail as they both fall.

One of the robots, a red Rotten who was first examined by Velma, Fred, and Daphne to track down Dastardly's location, managed to send the trio's location to him; the robot was later joined by the others hidden in a police car and they capture the group and took them to the Mean Machine to be imprisoned. All of the Rottens soon gathered around as Dick used two of the skulls to reveal the third one's location and eventually had Velma and Daphne sent back to their cell (as they previously escaped before) as Fred is left behind by Dastardly.

Following Dick Dastardly's success in stealing the final skull, along with kidnapping Scooby, the Rottens accompany him to the Parthenon in Athens, Greece, where they tried to shoot down the newly arrived Mystery Machine appears in the sky, having been transformed to have wings and jets. However, Dusty interfered by purposely have a Rotten misfire so that Daphne's life is saved because of the former's change of heart from her kindness previously, though the Mystery Machine gets hit regardless; this will eventually led to Dusty rallying up the entire Rotten entourage to help the Mystery Inc. gang and the Falcon Fury crew in defeating Cerberus. They soon capture Dick Dastardly and Muttley (who are escaping from the Underworld with the treasure) and brought them to the two groups. 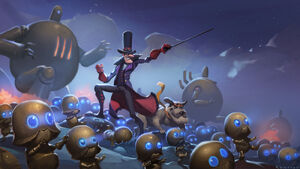 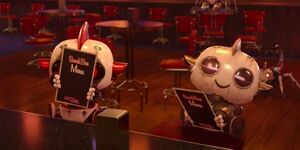