Kill Dante and everyone else who stand in its way.

The Rottweiler is a cybernetic monstrous Slayhound who once was a normal Rottweiler owned by a rich man.

This Slayhound is almost unstoppable when it locks on a target and it's also virtually indestructible as it's immune to bullets.

It appeared in the 2004 film Rottweiler.

He was first an ordinary security pet owned by a rich man. The man owned a labour camp where he puts useless and poor men who cannot pay their debts. During a daring prison escape by a man named Dante, who was put in prison for illegally entering Spain, and his girlfriend Ula, the Rottweiler was beaten up by Dante with a pipe while trying to protect his master.

Because of its injury the rich man paid scientists to turn it into a cybernetic Slayhound but after the operation the dog transformed from a loving pet into a killing machine. Seeing the new attributes of the dog, the rich man put him as security dog in his prison to prevent more prison breaks. The rottweiler met a new caretaker named Kufard whom it felt close to.

While on the search for the escaped Dante, the rottweiler proved his monstrosity by killing and hunting those who escaped earlier. When they already captured Dante, Dante again tried to escape by reaching for the security's shotgun. He managed to reach it and shot the rottweiler and Kufard. Sensing the danger is over Dante tries to find his girlfriend Ula. The rottweiler suddenly wakes up and sees his caretaker brutally shot. It then proceeds to chase Dante.

The rottweiler hunts Dante down for his deceased master, a thing still shown in modern dogs. Burned and bruised during his hunt for Dante, they finally faced each other in the burning prison camp after Dante, who after fultilely searching for Ula in a brothel but not finding her there, finally remembers from his own repressed memory that Ula got mauled and killed by the dog (before the dog's cybernetic revival) during their escape from prison. With both the man and the dog having a score to settle against one another, both of them perished for vengeance of their loved ones. The other morning a pair of firemen discovered the skeletons of Dante, Ula and the Slayhound's remnants laying on the beach.

The Rottweiler shows extreme levels of intelligince by throwing Dante's gun into the river and avoiding firepower from guns. His cyborg quantities give him invulnerability to pistol shots and other weaponry. He can also manipulate people perception causing Dante to hallucinate and develop schizophrenia, which gets him and the people around him into trouble.

It's also stronger than any other dog and even other animals,as in the film it was seen to easily overpower and kill other guard dogs. Even as a cyborg the Rottweiler shows cannibalistic attributes such as when he devoured both humans and his fellow guard dogs.

After its cybernetic modification, when not damaged the Slayhound looks like a deformed Rottweiler lacking fur in the one side of his face and it also has glowing blue eyes, revealing that it's a cyborg. This Slayhound has an extremely agressive behavior, and like most Slayhounds it's loyal to one person. It's also very sadistic, persistent and fearless, the only thing he cares is to avenge his friend's death and also fulfill his task by killing Dante. 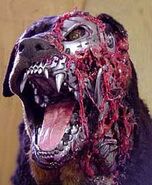 The Slayhound with parts of his face endoskeleton visible.

The Rottweiler inside the mist.

The Rottweiler's death.
Add a photo to this gallery

Rottweiler (2004) Trailer
Add a photo to this gallery
Retrieved from "https://villains.fandom.com/wiki/Rottweiler?oldid=3891615"
Community content is available under CC-BY-SA unless otherwise noted.