Spy
Agent of G.U.N.
Leader and member of Team Dark

Help Sonic the Hedgehog and his friends (succeeded).

Rouge the Bat is a character in the Sonic the Hedgehog universe. She originally appeared as the secondary antagonist of Sonic Adventure 2 and Knuckles the Echidna's rival. After SA2, Her acts and role as a villain are mainly like Knuckles before her by stealing herself as many jewels around the Sonic universe (including Knuckles's Master Emerald) and make herself rich, even if it means working with Dr. Ivo "Eggman" Robotnik. Despite this, she appears more as an anti-hero in recent games as she is usually shown to put aside her jewel-stealing obsession and assist in the greater good if need be, such as helping the resistance overthrow Eggman's rule in Sonic Forces.

In the English versions she is currently voiced by Karen Strassman while being voiced by Lani Manella and Caren Manual previously. She is voiced by Rumi Ochiai in the Japanese version.

Rouge the Bat is a very beautiful and world-famous treasure hunter. Her voluptuous and daring attitude turns any man's head. Her policy though is that duty comes first, but she has a big interest in jewels. Her figure, speech, and behavior masks her true identity. Rouge actually has a crush on Knuckles the Echidna, but refuses to admit it. Rouge the Bat is very secretive about everything and very little has actually ever been disclosed about her. She would often switch sides with either the good or bad to confuse them. Rouge the Bat does have allies, such as Shadow the Hedgehog and Topaz from G.U.N. (in Sonic X). It wasn't until after a few episodes that Rouge and Topaz actually became close friends. At the end of the season in which Topaz and Rouge met, Rouge and the others were transported home. While Rouge said goodbye to Topaz, Topaz had a tear in her eye, remembering all the good times they had. In Season 2, she is one of G.U.N.'s top agents.

She battled against the Metarex in Season 3 with Doctor Eggman and released Shadow. She joins the good side and declared war on Eggman after Christopher Thorndyke was sent to Earth.

Rouge seemingly possesses a locket belonging to Bokkun, Eggman's messenger robot. She usually pulls it out when Bokkun refuses to run errands for her, which convinces him to attend to her errands. In the Japanese version, the inside of the locket shows a picture of Cream the Rabbit, which indicates that Bokkun has a crush on her.

Rouge is a determined woman who almost never listens to anyone else but herself, she does what she feels is necessary for herself and switches between good and bad quite often, sometimes she wants to steal jewelry, and at times she wants to save the world, but in all goals she has, it always comes down to what is necessary for her, making her look like an overall prideful narcissist. She can also be hypocritical, as shown when she calls the person stealing the Master Emerald a thief, when she has stolen lots of things, including the Master Emerald. Rouge is also sassy, cheeky, vivacious, and disrespectful, along with her egotistical behavior, this makes most of characters in the games dislike her, especially her archenemy Knuckles, which when she is fighting with, she often uses dirty tactics, this is because Knuckles is superior to her in terms of fighting, and this she does with other superior opponents as well. Her rivalry with Knuckles has even gone to the point where, even if Knuckles does something heroic such as saving her from dying, she will still most likely get angry at him for little to no reason.

Despite all of this, she still does have a good side, she is seen multiple times actually caring for Shadow the Hedgehog, she has stopped Shadow and E-123 Omega from killing each other, has helped Shadow when he is damaged by an injury, killing the Black Bull, helping on defeating the horrible tyrant, Black Doom, and multiple times saving the world from destruction. Despite all of her heroic acts, in more recent games, she has shown that her attitude hasn't really changed much, considering in Sonic Free Riders, she is shown to be the normal disrespectful person she usually is, insulting one of her robot team members, and not even caring when the robot broke.

Rouge is one of the strongest female characters in the Sonic the Hedgehog series. Swift and powerful, Rouge has proved herself to rival that of Knuckles the Echidna. However, Rouge possesses the natural ability to achieve flight and is also able to glide by using her wings to manipulate her descend. When flying, Rouge can move as fast as Knuckles' gliding, but not as fast as Sonic or Shadow can run. Nevertheless, Rouge possesses an innate quickness, making her fast on her feet and can reach super speeds when running, though she is still not as fast as Sonic, Tails or Shadow.

As both a government spy and self-proclaimed "World's Greatest Thief", Rouge has been trained in infiltration and is skilled in the art of stealth as well. As most times, however, she uses these skills to pull different kinds of successful heists, and has proven herself as a master thief.

As a result of her training, Rouge can surreptitiously enter enemy-held territory, either through stealth or by manipulating others into believing that she is on their side, such as when she tricked Shadow and Dr. Eggman into believing that she was willing to help them in Sonic Adventure 2 when she was sent to investigate the doctor, and can hack computers and break codes in record time with successful results nearly every time. She is also stealthy enough to move nearly undetected through even the most fortified of locations, such as Prison Island, Dr. Eggman's various bases or Space Colony ARK and sneak up on people without bringing attention to herself.

Despite her pretty looks and flirtatious attitude, Rouge is well-versed in all kinds of combat and knows how to fight, making her a dangerous foe in battle. As a spy for the United Federation, Rouge has gone through several forms of special training in self-defense and knows a variety of martial arts. Her skills in combat are so great that she was able to fight the combat-versed Knuckles the Echidna to a standstill when confronting him on Space Colony ARK.

Rouge's fighting style focuses on a form of kickboxing, a style she has derived from her special combat training, and is rarely seen using her arms or fists when fighting, unlike Knuckles. When in battle, Rouge primarily fights her opponents by using a large number of skillful and specialized kicks to strike blows. Using her agility in line with her training, Rouge can perform moves such as high kicks, sidekicks, spinning kicks etc. striking her opponents with deadly precision and efficiency, and can even send her whole body spinning through the air with her feet first, turning herself into an all-piercing spear.

Most of Rouge's standard moves and techniques revolves around her Kick Attack move where she attacks her opponents with combos composed of kicks. Her special attack Screw Kick enables her to form a "screw" shape into midair while kicking, while her Drill Drive lets her send herself downward, with her feet first, as a spinning drill that pierces through her opponents. Also, her Hip Drop lets her drop onto the ground to form wide tremors that affect everything within its range.

When not attacking her opponents directly, Rouge has also been known to use techniques that involve some form of weapon. In Sonic Heroes she is shown to use Dummy Rings in her "Dummy Ring Bomb" move to paralyze opponents, and in Sonic the Hedgehog (2006), she used her "Bomb" and "Bomb Snipe" techniques with her Heart Bombs to damage her opponents.

The Sonic the Hedgehog videogames have featured several theme songs for the character.

The background music for the stage Security Hall (titled "I'm a Spy") in Sonic Adventure 2 and Sonic Adventure 2: Battle is generally attributed to Rouge, despite technically having no relation to her. Like most characters, Rouge is associated with a genre of music, specifically smooth jazz/bossa nova/fusion with some feminine sighs thrown in (similarly to how Knuckles is associated with the rap genre). It is interesting to note that the background music in her Club Rouge stage from Sonic Battle also has feminine sighing. No other BGM in the game has any form of vocal.

Rouge has been featured in many advertising campaigns and advertising for the Sonic the Hedgehog series in North America and Japan. At the launch of Sonic Adventure 2 Battle, Rouge and a few other characters were featured in a line of plushes advertising the game. Another Rouge plush was released as a prize for crane games in Japan at the launch of Sonic Adventure 2 Battle. As a campaign for the Sonic X anime in North America and Japan, keychains were distributed for the main characters in the show, one of whom was Rouge. Sega and McDonalds released a series of LCD Sonic Themed Games at McDonald's in 2004, the games were bundled with Happy Meals. Rouge was featured in the game Amy & Rouge Volleyball in which, "Players are challenged to move Amy from side to side to return Rouge's serves and volleys.".

Upon Rouge's introduction in Sonic Adventure 2, many game reviewers commented on her similarity to Knuckles, including such critical remarks as "Knuckles with bat wings and breasts", whilst some further criticized her design. Her "daring attitude" and narcissism received further comment. Rouge appeared on GamerRadar's list of "The Sexy Lady Beasts of Gaming", in which she is described as "Proof that voluptuous curves, thigh-boots, sexy eyes and rubber gloves can make any animal in the kingdom an object of lustful perverted desire. No matter how freaky-looking their real-world inspiration might be.".

Despite some criticism, Rouge has also been seen in a more positive light as well, with some fans of the series seeing her as the "Jessica Rabbit" of the Sonic the Hedgehog series. 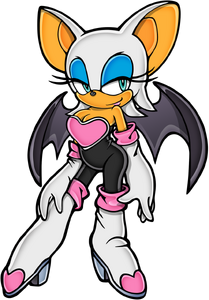 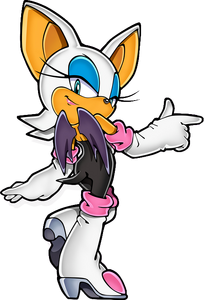 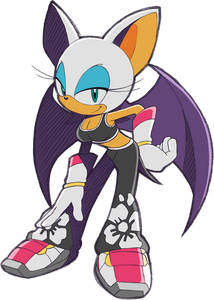 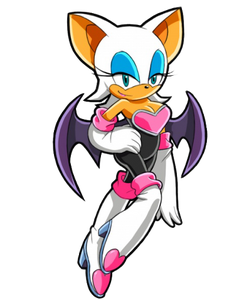 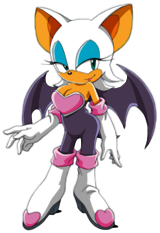 Rouge as she appears in Sonic X. 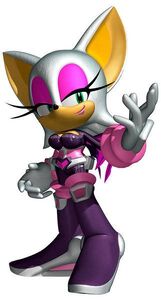 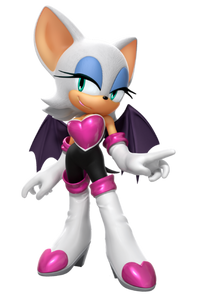 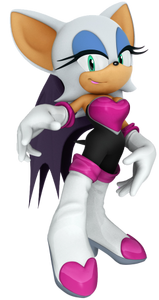 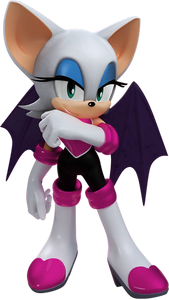 Rouge in the Archie Comics. 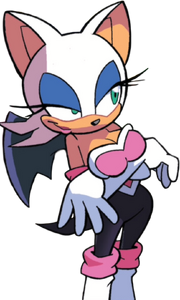 Rouge from the IDW Sonic comics. 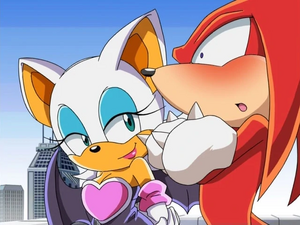 Rouge and Knuckles
Add a photo to this gallery

Retrieved from "https://villains.fandom.com/wiki/Rouge_the_Bat?oldid=3864980"
Community content is available under CC-BY-SA unless otherwise noted.